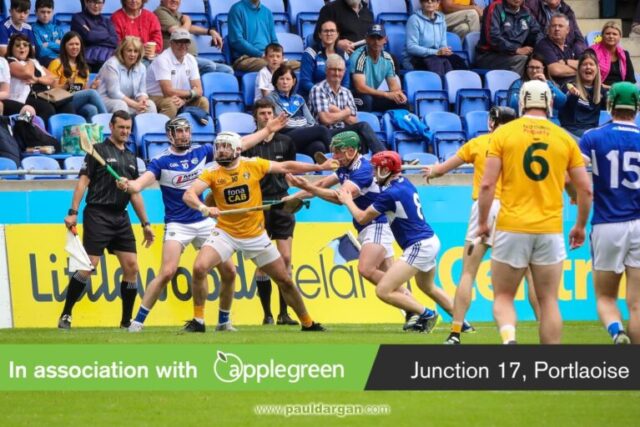 Cha Dwyer was Laois’s hero as his point in the third minute of injury time saw them defeat Antrim and preserve their Division 1 status for another year.

It was a remarkable win for Laois who had to play for almost 50 minutes with 14 men following the dismissal of Jack Kelly in the first half.

They led for most of the game but fell behind in the 69th minute when Paddy Burke curled Antrim ahead.

However, a free from PJ Scully drew Laois level and then they won it through Cha Dwyer.

Laois hurled with the breeze in the first half but it was Antrim who scored three of the first four points via Neil McManus, Conal Cunning and Michael Bradley.

But Laois announced their arrival in the third minute when Paddy Purcell skillfully made his way up the wing before burying the ball into the net.

It was tit-for-tat after that with the sides exchanging points but Laois led 1-6 to 0-7 after 22 minutes when they were reduced to 14 men.

Jack Kelly was fouled on the Antrim 45 but then wildly pulled on David Kearney with his hurl in front of the linesman.

Nevertheless, Laois responded well to the numerical disadvantage and outscored their visitors from there to half time.

Cha Dywer, Willie Dunphy, James Keyes and keeper Enda Rowland all pointed to leave Laois 1-11 to 0-8 ahead at half time.

Antrim came roaring back at Laois when play resumed and scored the first three points of the second half via David Kearney, Ciaran Clarke and McManus.

Laois kept their noses in front with Stephen Maher flawless on frees and every time Antrim came at them, they kicked on again.

But the extra man eventually looked like it was going to tell when Antrim went ahead as we went for four minutes of injury time.

However, Laois came good and will now have a free game against Dublin next Saturday with their status secured.