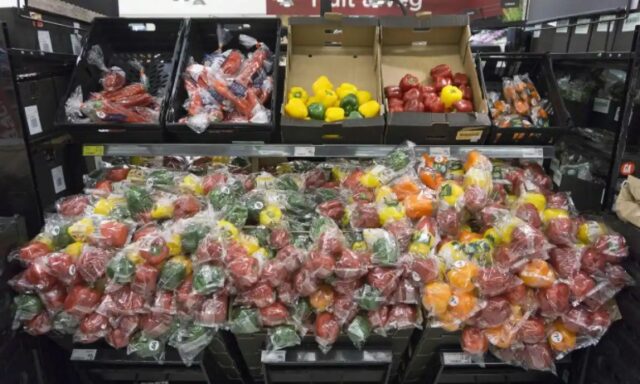 A Laois TD has called on the government to put a ban on plastic packaging during a debate in the Dail.

Sinn Fein’s Brian Stanley made the comments while discussing the new Circular Economy Bill which will pave the way for more reuse and recycling as well as the use of CCTV cameras to tackle illegal dumping.

He said: “It is important that we have fairness in a just transition. That needs to be at the heart of climate action.

“Citizens need to play their part but we must also get big business and large multinationals to do their bit. We have to move away from the throwaway culture of single-use plastic.

“Of course we want people to change their habits and use less plastic. However, large companies continue to package stuff in plastic.

“I am sure the Minister sees it in supermarkets. Products are in plastic trays. We need to ban them. We do not need plastic trays any more. We know that.

“We can do the weekly shopping without bringing home ten or 15 of these plastic trays that all have to be disposed of.

“If they go into the recycling bin, they might wind up in India in a furnace somewhere or in China, having to be shipped halfway around the world.

“We need to stop it at source. Reuse is okay but it is only second best. Cutting off the source of the waste needs to be the priority.

“We need to move away from the situation where we have that in supermarkets. There is also a cost to the packaging which is passed on to the customer.

“If I am buying vegetables that are in plastic wrappers, I can be sure the cost of the wrappers is added on to the purchase price. We need to stop it at source.’’

Deputy Stanley also called for companies like Bord na Mona to be at the forefront of this project.

He said: “Our semi-State companies need to be at the heart of this.

“I am appealing to the Minister as a Dublin Deputy to look out at this. Bord na Móna is already involved in recycling and the circular economy.

“It is operating major waste facility plants, one dealing with tyres and another dealing with household waste. It has really geared up in this area.

“We need to address this in such a way that we are not reinventing the wheel. We need individual action and action by companies to cut off waste at source. I welcome the circular economy but if we can cut of waste at source, it is better.”

Finally, Deputy Stanley welcomed the announcement regarding CCTV and hoped it would help to combat illegal dumping.

He said: “I very much welcome the provisions on CCTV. This is an issue I have raised on many occasions. I concur with previous speakers.

“It is a pain in the head that we cannot use CCTV. It was being used very effectively in County Laois. Small cameras strapped to a bush or a tree were catching people littering.

“GDPR has gone crazy and we need to stop that. I do not know where the current interpretation of the regulation comes from but we are overusing GDPR and it is being used as an excuse sometimes.

“We need to use CCTV. I ask the Minister to progress the Bill quickly so that we can accelerate these provisions and get mobile CCTV back in action at black spots.

“We need to watch out that whatever action we take does not put people further into poverty. We must ensure we reward low and middle-income households in particular.

“We can do that through deposit return, for example. Let us move to using glass bottles. The page in my hand is A4 size. Why cannot we have standard bottles?

“The Minister of State, Deputy Ossian Smyth, will remember, as I do, when we used glass bottles which could be washed and reused repeatedly.

“People were paid to return them. Let us get away from plastic and remove it from society, in as far as we can, and try to reward people for good environmental habits.’’