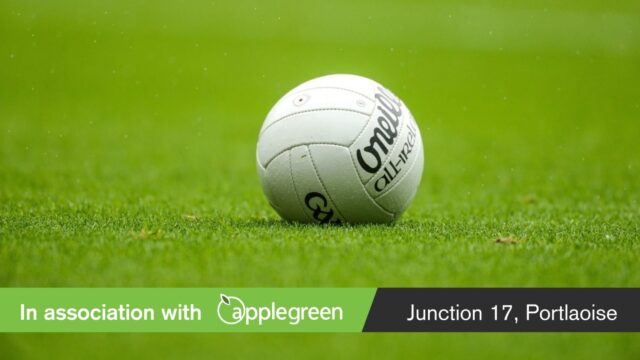 A second-half hat-trick from county man Gary Walsh – including a spectacular 60-yard lob over gallivanting goalkeeper Killian Roche – helped Ballylinan to their first league win of the year this evening.

Walsh only came on as a sub at half time but proceeded to hit the net three times, the first an audacious long-range effort that just about beat Roche who was coming back on to his line after a foray up the field.

The Clare native is a class footballer and a quality keeper and probably covered more ground than any player on the field.

But such runs come with a health warning and Walsh made Killeshin pay the price 12 minutes into the second half when he came out the field to get possession and had only one thing in his mind when he walloped a ball towards the goal. Roche raced back and got a hand to it but he couldn’t keep it.

The score put Ballylinan 1-9 to 0-5 ahead and put an end to Killeshin’s brief comeback that had seen them score three of the first four points of the second half.

Three minutes later Walsh blasted a second goal to the net – a powerful effort off his left boot and he completed the hat-trick with two minutes remaining when Pauric McEvoy picked him with a delightful pass from a sideline ball.

The win was a much-needed boost for Ballylinan, who lost seven of their eight competitive games last year and their first three fixtures this year.

While Killeshin were far from full strength, Ballylinan had a decent team out and played well in the opening half to lead 0-8 to 0-2 at the break.

The Farrell brothers, Cathail Dunne and McEvoy, who kicked two points from play in the opening 30 minutes from centre-back, were all to the fore while Kevin Byrne and Michael Downey also impressed in defence.

Evan Lowry was Killeshin’s main scoring threat up front and finished with five of their six points and when he popped over the first two on the restart, it looked like a comeback may be on.

But Ballylinan, and Walsh, had other ideas and they saw it out with plenty to spare in the end.

Killeshin are back in action this Saturday when they host Arles-Kilcruise while Ballylinan have the weekend off before facing Rosenallis on Friday week.

Elsewhere this evening, Ballyroan-Abbey’s second team were convincing winners over The Heath in Division 3A while Spink’s first team had eight points to spare over Arles-Killeen’s second side in Division 4.

Veterans John Larkin, Damien Delaney and Greg Ramsbottom were all part of the Stradbally third team in their 1-11 to 0-11 win over Barrowhouse in ACFL Division 5.

There was also derby wins in Division 5 for Park-Ratheniska over Timahoe, Slieve Bloom over Mountrath and Ballyfin over Rosenallis.

The game between Colt and Shanahoe didn’t go ahead.

SEE ALSO – All our coverage from ACFL Division 1B