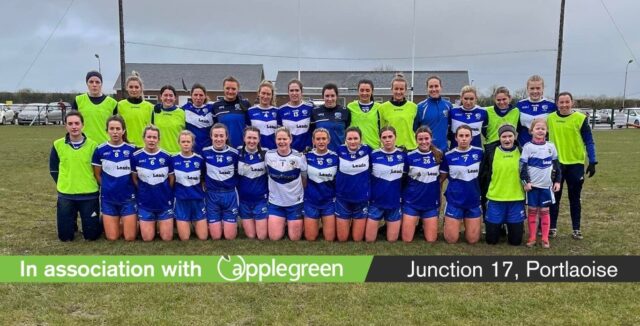 Only a last gasp Emma Lawlor point salvaged a win for Laois as they came from behind at half time to do it.

Laois now sit top of the group with two wins from two and a win next weekend at home to Wicklow will see them into a Leinster semi final as group winners.

Laois played against the stiff breeze in the first half but took the lead through two Emma Lawlor frees only for Saraoh Doyle and Elle McEvoy to reply.

Laois had earlier had two goal chances fall to Eva Galvin but she failed to convert – however she was influential in Laois’s first.

Her neat pass set Laura Marie Maher through and she finished to the corner. Laois won the resulting kick-out and fired it in to Maher and she did the business again for two goals in a matter of seconds.

Offaly’s response was good though as Elle McEvoy, Saoirse McGuinness, Ciara Walsh and Saorah Doyle all pointed to leave it 2-3 to 0-7 at the midpoint of the half.

Emma Lawlor steadied the ship for Laois but Offaly kept narrowing the gap.

Minutes before half time, Laois lost Ellen Healy to a sin bin and Offaly immediately made use of their numerical advantage as Ciara Walsh struck for a goal to give them the lead for the first time.

Saorah Doyle added a free and Offaly led 1-9 to 2-4 at half time. Lawlor and Maher pointed for Laois when play resumed but Doyle kept Offaly ahead.

Laois were then restored to the full compliment as an Anna Healy free levelled the game with 40 minutes on the clock.

Laois began to wrack up wides though and a Saroah Doyle free gave Offaly a one point lead at the midpoint of the half – 1-11 to 2-7.

Laois then had a golden goal chance as Jane Moore split the Offaly defence but Emma Lawlor struck the post.

Offaly sub Eve Kelly then made it a two point game with 50 minutes on the clock.

But Laois did get ahead with five to play. Clare Conlon began the recovery with a point from the bench and then Lawlor swung over a free and a score from play.

However, Offaly refused to give up and drew level through Doyle before Lawlor responded for the home side again.

Laois would have to play the closing stages with 14 players when Clare Conlon was sin binned for a high challenge.

St Brigid’s Marie Byrne levelled the game but Laois broke up field in the first minute of injury time where Lawlor fisted over her ninth of the afternoon.

That proved a wise decision as Offaly had the chance to draw the game with the final kick as Saraoh Doyle had a free but she just dragged it wide and Laois held on.