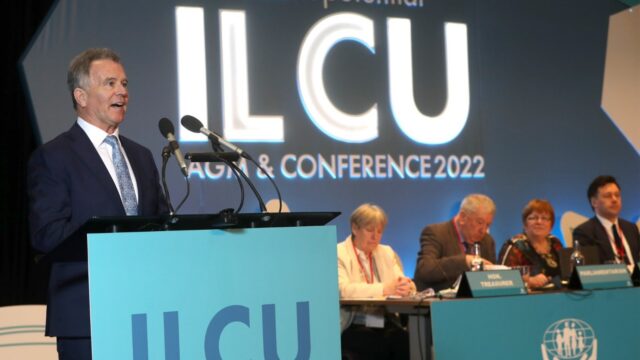 Laois-Offaly TD and Minister for State at the Department of Finance has said that the “Credit Union sector is one of our society’s most prized possessions” and that the trend of bank branch closures make them more important than ever.

He was speaking at the AGM of the Irish League of Credit Unions AGM, a 32-county organisation, in Belfast on Saturday.

Among the points he made was that his appointment is the first time that a Minister of State has been given responsibility for Credit Unions.

And he said that the recently-published terms of a review of the Retail Banking sector comes “at an opportune time with the impending exit of Ulster Bank and KBC from the Irish market and the trend of bank branch closures both North and South”.

“Speaking at another Credit Union conference recently, I highlighted that fact that in many towns in Ireland the local Credit Union is now the only remaining financial institution,” he told the meeting.

“This represents a great opportunity to fill the gap left by bank exits and closures.

“The pace of change in the financial services landscape has become relentless and this can be seen in the rapid growth of FinTech and digital banking.

“If you have a Revolut account now you can apply and get approval for a loan in less than 10 minutes.

“This represents both an opportunity and a challenge for Credit Unions.

“There is great opportunity for Credit Unions to harness developments in FinTech to broaden membership and grow lending and many have already begun to do so.

“There is also the challenge of balancing the use of new technologies while still keeping the essence of providing community banking.

“While the banking sectors North and South differ, many of the overarching issues I have noted apply to both jurisdictions.

“Representatives from the League will attend the Retail Banking Forum in Tullamore next week.

” I would like to say again that I believe the Credit Union sector is one of our society’s most prized possessions.

“The local Credit Union and the role it can play in the economy and in communities is more important now than ever before.

“If the Credit Union sector is to grow and become the movement it has the potential to become more needs to be done by all stakeholders to embrace business model change and increase lending and collaboration.

“The League has a leadership role in providing your members, many of whom are here today, with commercially-minded support to enable and implement the required business model change.”

“The Irish League of Credit Unions has a long tradition and history both North and South,” he also said.

“The late great John Hume was one of the founding members of Derry Credit Union in 1960 and became the League’s youngest ever president in 1964.

“In a 2003 interview John Hume spoke of the pride he took in his work for Credit Unions and the League, saying: ‘Of all the things I’ve been doing, it’s the thing I’m proudest of because no movement has done more good for the people of Ireland, north and south, than the Credit Union movement.'”