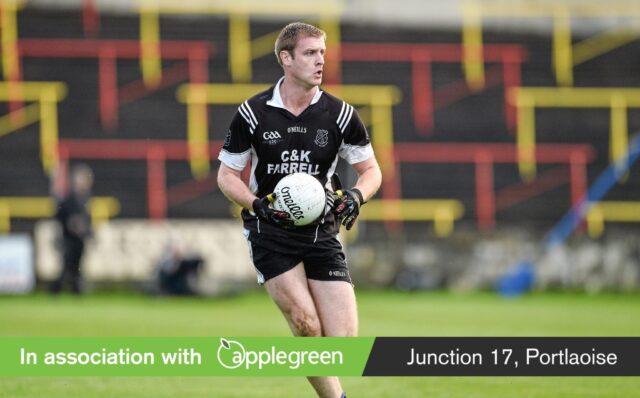 Donie Kingston returned to competitive action for the first time in 2022 as Arles-Killeen defeated Arles-Kilcruise this evening.

It was the Laois footballer’s first action since late last year and his return to fitness will serve as a boost for the county side ahead of the Tailteann Cup next month.

This was a tight encounter between the two teams that started the evening locked together at the foot of the table.

But goals in either half did the trick for Killeen as they won for the second week in a row.

Conor Keightley, Paul Kingston and Colin Dunne pointed for the home side early on but Kilcruise replied through Brendan Conway, David Conway and Arran Moore.

The first goal arrived just after the midpoint of the half when Arnie Mahon kicked in a long ball which was won by Colin Dunne.

He flicked it off to Sean O’Shea who clipped on in to Paul Kingston and he rounded the advancing Ciaran Lawlor before smashing a shot into the top corner of the net.

Kingston added a point soon after but Kilcruise’s response was good and they drew level by half time.

David Conway landed three more points while Ross Munnelly slotted a free to leave it 1-4 to 0-7 at the break.

Donie Kingston and Ross Munnelly traded points when play resumed and then Kingston set up another sub, Donie Brennan, to give Killeen the lead.

Both sides were then reduced to 14 men when Cialann Mulhall and Colin Dunne were shown straight red cards for an incident which took place off the ball and was spotted by the umpires.

Killeen powered on as a Munnelly point from play was wiped out by a Brennan mark and a third of the evening for Paul Kingston.

And the contest was over ten minutes from the end when Paul Kingston carved the Kilcruise defence open and fed Sean O’Shea who rifled home another goal.

Munnelly hit back with another free but Donie Brennan ended the contest with his third and Killeen took the points.

Rosenallis withstood a ferocious comeback to end Stradbally’s 100% Division 1B record and leapfrog them at the top of the table.

The home side were 11 points up with 42 minutes played but in the end they had to hold on for a one point win.

Rosenallis started the game very well and led 1-9 to 0-2 at half time.

Stradbally grabbed the first two scores of the second half but a second Rosenallis goal had them 2-9 to 0-4 ahead.

Stradbally came roaring back but their recovery just fell short as Rosenallis held on to win.

Rosenallis make the long trip to Killeshin next Friday for the second last round in this phase of the competition while Stradbally are at home to Arles-Killeen on Saturday.