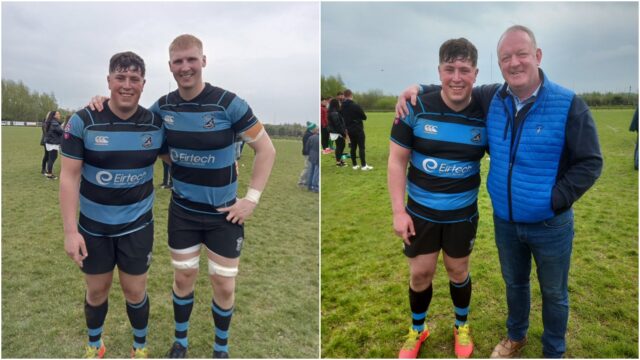 There was joyous scenes in Shannon rugby club in Limerick on Saturday afternoon as the famed outfit celebrated their return to Division 1A of the All Ireland League.

Shannon were 30-15 winners over Naas in the Division 1B promotion playoff, a win that brings them back to the top division for the first time since 2018-2019.

Historically Shannon are Ireland’s most successful club but since losing their top division status in 2013 for the first time, they have spent only season in the highest league – that 2018-2019 campaign when they were instantly relegated back down.

But they won their last eight games of this season, culminating in yesterday’s impressive win in front of a big crowd at their home grounds in Coonagh.

And central to their cause were two very promising young Laois players.

Luke Rigney from Portlaoise started at prop with David Maher from Stradbally behind him in the second row.

Maher got the game’s first try after quarter of an hour as Shannon laid the foundations for an impressive win, Jake Flannery (who is set to join Ulster next season), registering 20 of their 30 points. Bryan Croke from Portlaoise was outhalf on the Naas team.

Rigney has been with Shannon for the past couple of season with Maher only linking up with them this year but it’s the latest occasion for them to line out alongside each other having played with Portlaoise at underage level and at school.

Both have a considerable sporting pedigree. Rigney’s dad Des was part of the great Buccaneers teams in the 1990s and enjoyed a fine AIL career himself. Maher is a son of former Laois football great Tony ‘Barney’ Maher.

Luke’s uncle Brian won a number of AIL medals with Shannon, where among his second-row partners was Mick Galwey. Galwey’s nephew Sean McCarthy in the Shannon back row on Saturday.

Elsewhere, Will Reilly from Ballyfin and Cian McCann from Mountmellick were part of the Buccaneers set up that beat Queens University by 18-17 in Belfast.

Today in the Aviva Stadium, former Portlaoise players Conor Kelly and Craig Adams will be on opposite sides as Clontarf and Terenure do battle in the AIL Division 1A final.

Kelly will be outhalf for Clontarf with Adams on the wing for Terenure. That game is being shown live on TG4 and kicks off at 2.30pm.