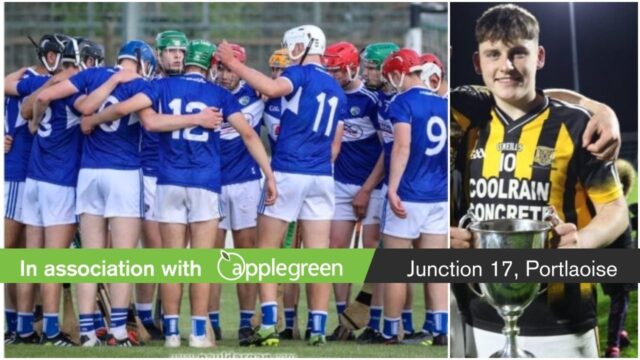 The Laois minor hurlers are through to the Leinster final following a dramatic three point victory over Kilkenny in O’Moore Park.

Declan Qualter’s charges became the first Laois team to defeat Kilkenny at this level since 1964 and reached their first provinicial final since 2013.

Camross forward Ben Deegan began the day as the highest scorer in the All-Ireland championship and he extended that with another ten points.

Another faultless display from placed balls was crucial for Laois – with two late frees when Kilkenny got the gap back to one proving decisive.

This was a very good performance from the hosts as they took the lead early on and never looked like relinquishing it as the game progressed, they went from strength to strength throughout.

The first half was a real physical battle with both sides setting out their stall early, but Laois were certainly the more dominant side for the opening 30 minutes. Declan Qualter’s men found themselves three points ahead within 10 minutes after three successful frees from Ben Deegan.

His opposite number Aaron McEvoy fired back with two and Deegan replied with one before Antony Ireland Wall scored two impressive points from play for The Cats as they drew level.

Deegan and Jer Quinlan pointed from play and Rory Glynn got one for Kilkenny before the heavens opened for Laois. Captain Eoghan Cuddy won possession in midfield and took off on an unbelievable run through the middle, beating five defenders along the way before laying off to Quinlan who rattled the net with a low strike.

Tom McPhillips would point for Kilkenny just before the break but they trailed by three – 1-6 to 0-6.

Any thoughts of a Kilkenny revival in the second half were quashed early on when Quinlan picked up where he left off by splitting the posts beautifully before Deegan tacked on another free.

The visitors got two excellent points from play with Ireland Wall scoring his third of the game whilst Edward McDermott added a long range one from the wing.

The Kilkenny full back line couldn’t handle Quinlan as he gathered another ball and struck it over.

Cormac Byrne followed with his first of two in the game and Ben Deegan stepped up with an excellent long ranger from play.

Kilkenny got a few scores back on the board through Eoghan Lyng and Greg Kelly (2) and they were starting to build a head of steam but Cormac Byrne kept them at bay when he broke through their defence before pointing.

The visitors introduced four subs and they did make an impact as Michael Brennan and Mikey Stynes both pointed in the final minutes.

Kilkenny were pushing for goal late on but there was nothing getting past Tom Cuddy at centre back, the Camross man had a colossal game, along with every other Laois back it must be said. They were an impervious unit.

The final whistle seemed never coming but Ben Deegan kept Laois ahead with three points from frees, with two of those coming well into injury time just as Kilkenny had the lead reduced to a single point.

The whistle was eventually blown on 65:40, and O’Moore Park could finally breathe again!

Laois will have a quick turnaround for the final as they are due to renew acquaintances with Offaly next week.

The Faithful had a big win over Dublin today in the other semi final and the neighbours will clash again in the decider.