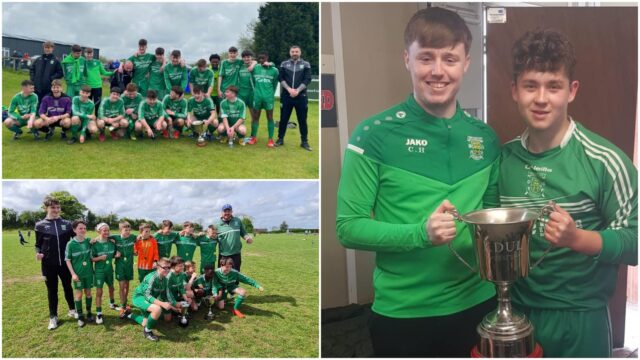 Following on from their winning of the U-12s Major Division, Portlaoise AFC travelled to Stanley O’Hara Park to face Naas AFC in the SFAI South Leinster Regional Final.

The game offered the Portlaoise players the chance to be the first to secure the U-12s cup in the club’s history.

The game started in bright sunshine, with Portlaoise dominating possession.

Naas defended well and caused a few early problems for Portlaoise with the movement of their two forwards.

Portlaoise AFCs possession and combination play eventually paid off with a wonderfully worked goal to lead 1-0 at half time.

A confident Portlaoise continued their form into the second half and secured the cup with excellent finish for a 2-0 victory and a historic achievement secured.

Both teams had been on good runs in the league and cup and Kilcullen may have had the slight psychological edge on paper in advance after beating their opponents 4-2 in March.

From the outset there was plenty of intensity across the pitch and with less than 3 minutes on the clock the deadlock was broken.

A lively Kilcullen midfield and forward line took advantage of very casual overplay at the Portlaoise back allowing a scrappy ball across the goal line to be fumbled across the line at the back post.

That lead lasted only 9 minutes when the impressive Ben Dwyer cut back and crossed from the right side sending a lovely ball over to Cathal Lee on the right.

Lee passed to Ben Doyle who turned on the spot and his initial effort fell towards Jamie Toman who made no mistake to finish into the lower right corner.

Kilcullen went back in front in the 32nd minute when their goal kick went through the split Portlaoise defence and two attackers linked up quickly. The shot scrambled under an unlucky Banacik to bounce in to the goal.

Almost ridiculously, the next attack saw an instant equaliser when Robbie Farrell’s excellent cut back from the corner found a ghosting Kieran O’Donnell amongst a busy box to smash it home from close range.

Portlaoise struck next in this tactical dogfight on 66 minutes to go ahead for the first time.

Livewire Jamie Toman flicked the ball over his head and in behind the backline to send Ben Doyle tearing in and Doyle doggedly earned the corner. Robbie Farrell’s corner ball in was taken down by Toman in the box and Kieran O’Donnell pounced to bury it.

Kilcullen and Portlaoise both had chances in the minutes after with Portlaoise’s Cathal Lee just firing a shot over when he had more time than he thought.

Kilcullen were really giving it a go too and a brilliant double save by Banacik palming one away from an inswinger and then the returning shot in by plucking it out of the air in some style.

Cathal Lee again was hunting his goal and was unable to get enough power behind his shot after he beat 3 defenders to get into the box and the keeper prevented Ben Doyle picking up the scraps.

It seemed like more goals were there and the next would be the game changer and on 78 minutes Cathal Lee finally got his goal. Jamie Toman set him up in on goal and another Lee super finish followed.

Despite 7 minutes of injury time, Portlaoise held out to reverse the 4-2 league fixture score and Portlaoise AFC were ecstatic to take the Kildare U-18 Cup back to Laois.