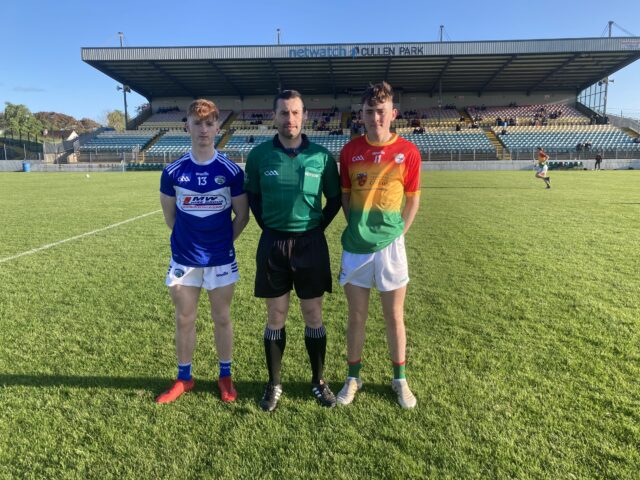 Two late goals from half time sub Eoin Johnson helped the Laois minor footballers to a thrilling win over Carlow in Dr Cullen Park this evening.

Laois and Carlow had both been badly beaten and knocked out by Offaly in the Leinster championship and so were re-routed to the Seamus Heaney Cup shield competition instead.

In all there was eight changes made to the side that started against Offaly and by the end it was vastly different again.

It had looked like it was all unravelling badly for Laois eight minutes into the second half when defender James Devoy and manager Conor Gorman were both red carded and captain and top scorer Davy Costello went off injured.

Carlow had been by far the better team in the opening half despite playing against a stiff breeze. They created a number of goal chances and raced into a 1-2 to no score lead after just eight minutes, the goal coming from full-forward Cillian Moore.

Costello responded with 1-1 for Laois but Carlow were dominant and were 1-6 to 1-1 up coming up to half time before Ben Slattery struck for a Laois goal. There was only two points in it at half time.

Matthew Farrell pushed Carlow three clear when he became their third half back to score early in the second half but Laois kept in touch with a couple of frees from Costello.

A dramatic minute of play then saw James Devoy red carded when he clashed off the ball with a Carlow attacker and a bad situation seemed to get worse when manager Conor Gorman was shown a yellow and then a red for protesting with referee Robert Roche.

To add to their woes, Costello was forced off injured at the same time.

But Laois found it within themselves to keep battling on.

Sub Tom Bride kicked three good frees and Ryan Little added one as the sides went point for point but Carlow were a point up as the 60-minute mark approached.

A great Laois move in the 58th minute ended with Johnson finishing well to the net after being set up by Little to put Laois into the lead for the first time and minutes later Little set up Johnson again.

Carlow got a couple of late points from midfielder Cathal Healy and despite a chaotic finish – that saw Jake Darcy and Carlow’s John Phiri given their marching orders, Laois held on.

They now play Wexford in the semi-final of the competition next week.