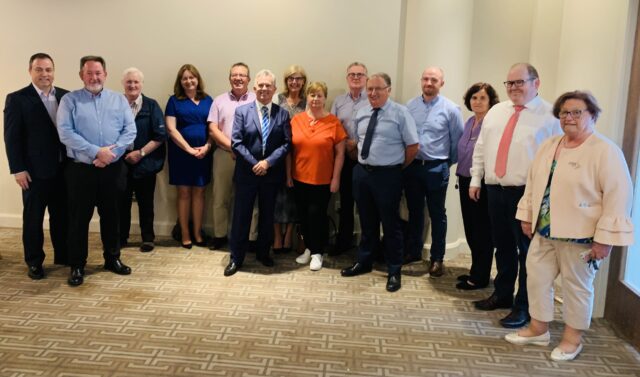 The meeting was held in the Killeshin Hotel in Portlaoise.

The are five Credit Unions operating through nine different branches in Laois.

People First are present in Portlaoise, Abbeyleix and Stradbally
while St. Canice’s Credit Union have branches in Mountrath, Rathdowney and Durrow.

The remaining Credit Unions are found in Mountmellick, Portarlington and Carlow.

Deputy Fleming said: “As a first Minister of State to be given specific responsibility for the Credit Union Sector, I have been engaging with Credit Unions and their representative bodies throughout the country.

“I was very pleased to meet with all the Credit Unions that operate in County Laois and to hear their views on how Credit Unions can become a truly community banking movement in Ireland.

“I gave a briefing on the new legislation I am bringing into the Oireachtas soon which help Credit Unions grow.

“This was recently approved by Cabinet. There was a very positive and engaging discussion on the forthcoming legislation which will be published soon.

“Since I became Minister with responsibility for Credit Unions I brought in legislation to allow virtual and hybrid AGM’s for the first time ever. We also cut levies payable by Credit Unions by 54% in the last two years which was a significant saving for the movement.

“Separately the Central Bank has authorised three funds operated by Credit Unions through which every Credit Union can invest in the funding for Approved Housing Bodies for social housing.

“There is now a tremendous opportunity for Credit Unions to grow by providing more services to members of the public who up to now were dealing with the traditional banks.

“Finally as Minister with responsibility for Credit Unions I would urge everyone to conduct their financial affairs through any of the nine Credit Union Offices in County Laois.

“The Credit Union is the most trusted brand in Ireland with strong roots in the local community and its important they continue and prosper in this role in the future.”