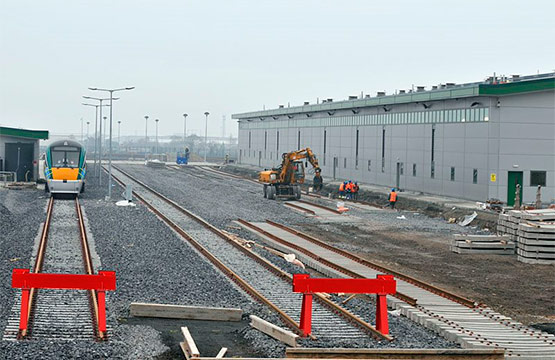 Minister of State in the Department of Finance, Sean Fleming, was in attendance at the event.

The Laois TD explained how important this depot is to the people of Laois and the rail network as a whole.

He said: “Generations of local people have worked in the sleeper plant and it is a key anchor employer in Co. Laois.

“It was good to attend this event which demonstrated the company’s capabilities in the area of infrastructure maintenance and renewal, including the utilisation of new and emerging technologies to deliver a cost effective, safe and reliable infrastructure.

“The event also gave an insight into the application of the signalling system in the control of train operations.

“Portlaoise is a central location for rail infrastructure in Ireland and there are many local businesses that supply products and services to Irish Rail.

“All the materials together with some of the heavy equipment that they use for installing new railway tracks and sleepers and for levelling the ground under the track and compacting it, all with high tech mechanical equipment, was on display.

“Some of this equipment is supplied by european manufacturers in countries where they have a much greater rail network.

“I was pleased to hear that some of the local staff were being trained to operate such equipment so that we will not be as reliant on people coming in on a temporary basis to operate here in the future.

“There was a very large attendance on the day including Irish Rail employees from all over Ireland to see what’s being carried out in upgrading the rail network throughout the Country together with key suppliers and the Board of Directors of Iarnrod Eireann.

“Overall everybody in Ireland can clearly benefit from much improved and greater rail facilities and a reduced level of motor vehicles on our road network which is better for our environment.

“Everybody is a winner including the public, the employees, the environment and Iarnrod Eireann/Irish Rail.”