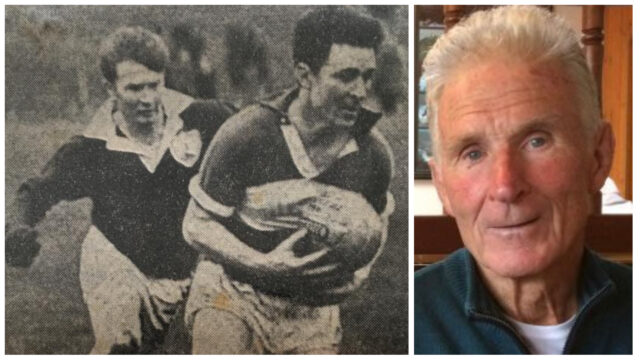 The death has occurred of Laois native Mick McDonnell, a retired Garda sergeant in Cobh in Cork, and remembered as one of the greatest Laois GAA dual players of all time. He was aged in his early 90s.

From Spink originally, McDonnell worked in Fleming’s Fireclay in The Swan as a young man before joining the guards where he was stationed in Cork city in the 1950s.

At the time he was a prominent Laois hurler and footballer, and played senior hurling with the county from 1953 to 1964 and senior football from 1952 to 1968.

However, during that time he switched club allegience from Spink (football) and Abbeyleix (hurling) to Cork, playing football with Macroom and St Finbarr’s and hurling with famous Sarsfields club, whom he won a Cork senior county final with in 1957.

A hugely interesting aspect of his career was that he caught the attention of the Cork football management and played in the early rounds of their championship campaign in 1957.

They won the Munster championship that year but McDonnell wasn’t used in the All Ireland series and Cork famously lost that year’s All Ireland final to Louth.

Though he continued playing at club level in Cork, he returned to Laois for the county scene the following year and played in Leinster football finals in 1959 and 1963.

He’s remembered as a colossal player in both codes, and someone who lined out with some of the great Laois footballers and hurlers – the likes of Tommy Murphy, Jack Kenna and Paddy Dunne in football and Paddy Lalor, Christy O’Brien, Billy Bohane and the Fennells in hurling.

Originally stationed in Cork city, he was promoted to the rank of sergeant and transferred to Cobh where he lived and remained working for the rest of his career.

A huge sports fan, he followed all sports and was a keen supporter of Cobh Ramblers in the League of Ireland.

He also continued to follow Laois for many years, regularly linking up with his old colleagues from the 1950s and 1960s before and after matches.

Mick passed away peacefully, surrounded by his loving family and in the loving care of Dr Harry Kelleher and all at Oaklodge Nursing Home, Cloyne.

Beloved husband of the late Regina and much-loved father of Frank, Clodagh and Aoife, dear brother of Betty and the late Pauline, Dympna, Mona and Evelyn.

Removal on Wednesday, August 10th, at 10.30am to St. Colman’s Cathedral for 11am Requiem Mass, followed by burial in St. Colman’s Cemetery.

Michael’s Requiem Mass will be livestreamed on www.cobhcathedralparish.ie