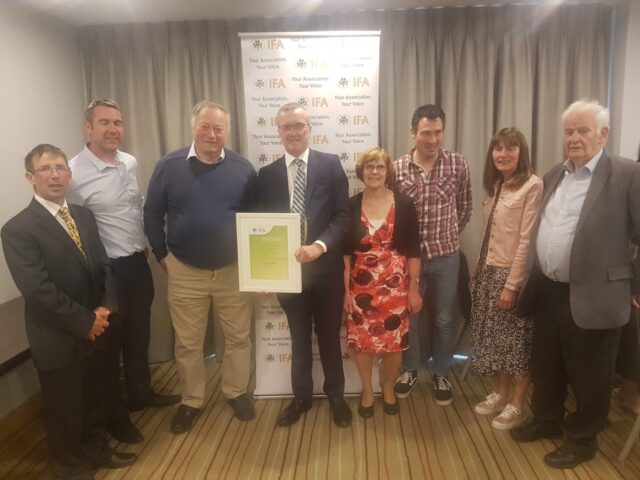 Tillage farmers Dan and Breda O’Connell from Killaglush, were presented with their awards by Tim Cullinan, IFA president.

They were nominated by the Vicarstown branch of IFA as the 2022 winners for their outstanding commitment, loyalty and support at branch, county and national level down through the years.

The couple has been involved in Laois IFA since the 1970s. Breda has been active on the farm family committee over the years.

A modest Dan told LaoisToday: “I was an ordinary member, never anything else. I went to the meetings. Breda was a better member than me.”

When asked about the key issues he remembers, Dan – an enthusiastic participant in meetings – said: “The losing of the beet was the big one and bad prices for commodities was another.

“It’s only in latter years that prices have come up to something respectable. Farmers are always the poor relation.”

Laois IFA chairman, John Fitzpatrick, said it was unusual for two people to be nominated for an award.

Both Dan and Breda had huge interest in all IFA and farming issues and continue to be involved, he remarked.

He said: “When we have open and frank discussions, they will always have input.”

Tom Cushen from Park, Ratheniska, was also presented with his award on the night for the year 2020.