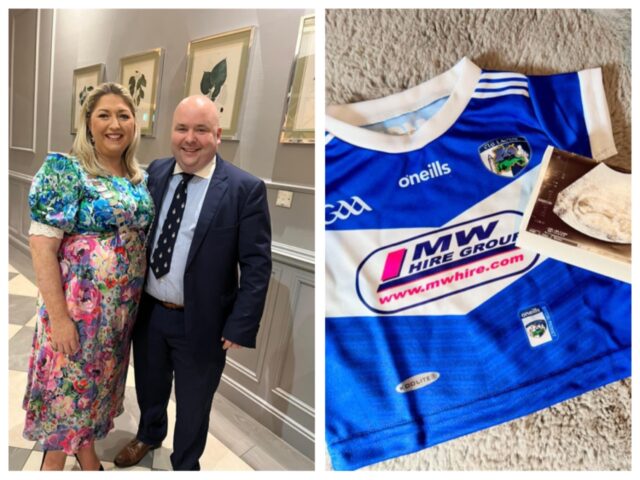 Laois County Council Cathaoirleach Thomasina Connell has announced that she is expecting a baby – making her the first sitting councillor to give birth while in office.

Cllr Connell, a Fine Gael councillor for the Portlaoise area, announced on social media that she and her partner Tristan Lynas from Kilkenny are expecting their first child in December.

It makes for a busy time for Cllr Connell, who also runs her own solicitor’s practice in Portlaoise.

“Big news from Tristan and me,” posted Cllr Connell on social media.

“In December, Two will become Three. If all goes to play, They’ll be a Laois fan. A new baby we can’t wait to see.”

Cllr Connell was elected to Laois County Council at the Local Elections in 2019. She has since been elected as chairperson of the Portlaoise Municipal District, a position she held from June 2021 to June 2022.

And since June she has been the Cathaoirleach of the overall council, a prestigious role that sees her represent the council locally and across country. Next March she will be due to attend the St Patrick’s Day parade in New York as part of her duties.

Cllr Connell was a General Election candidate in 2016 alongside the long-serving Laois-Offaly TD Charlie Flanagan – and she’ll surely be in the running to be his replacement whenever that time comes.

While female representation in politics has increased in recent times, fewer than 10 women have been elected to Laois County Council since Fianna Fáil’s Mary Wheatley became the first in 1985.

And politicians giving birth while in office is still a relatively rare occurrence, though Helen McEntee, the current Fine Gael Minister for Justice is expecting her second baby in the coming months.