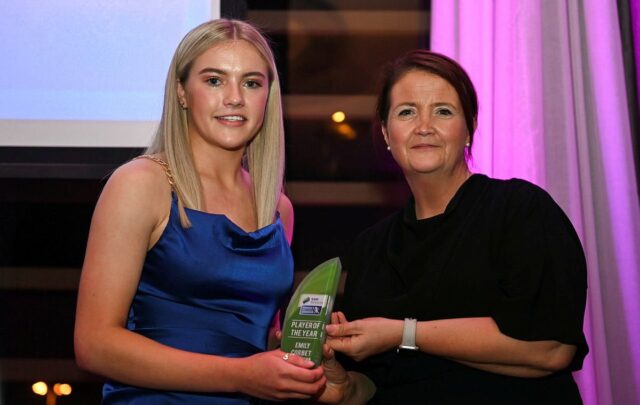 An incredible season for a Laois teenager was capped off in fine style last night at the Women’s League of Ireland Awards.

It is made even more impressive by the fact that she defeated two Irish internationals to claim the prize – Peamount’s Aine O’Gorman and Wexford Youths’ Ellen Molloy.

In just Athlone Town’s third ever season in the league, their manager Tommy Hewitt won Manager of the Year.

That is after he guided the team to a second place finish in the league – just losing out on the final day of the season to Shelbourne.

He also brought them to their first ever FAI Cup final where once again Shelbourne got the better of them.

But the success of Athlone Town was largely down to the exploits of their striker Emily Corbet.

In just her second season of adult football, Corbet smashed in 20 goals and finished runner up in the race for the Golden Boot behind Aine O’Gorman.

As well as being named Player of the Year, Corbet was also named in the Team of the Year.

Corbet previously played for Killeigh in the Midlands League before joining Athlone Town where she made her deubut in 2021.

She has been capped for the Republic of Ireland at U-17 and U-19 level and will be hoping to continue her incredible start to her career next season.

Emily recently spoke to us about her career to date and you can check that out on the Podcast below:

Any Podcast listeners who want to receive the private feed to listen on Apple Podcasts, or any other platform (with the exception of Spotify) should email info@laoistoday.ie and we will send you the link.