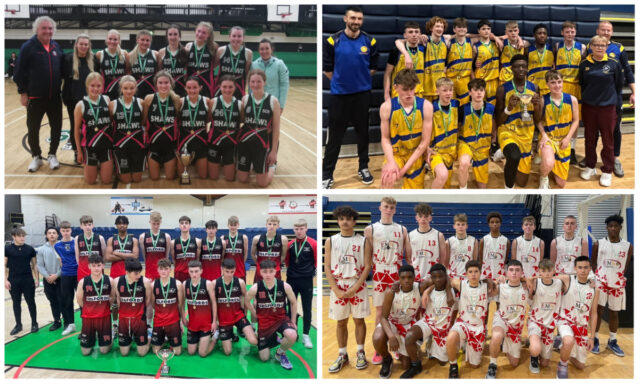 History was made in the National Basketball Arena in Tallaght yesterday as three Laois schools claimed glory in Midlands ‘A’ Regional finals.

The U-16 and U-19 boys finals were all-Laois affairs and they turned out to be two excellent games.

Colaiste Iosagain defeated Portlaoise CBS in a thrilling U-16 final that went right to the wire.

This was historic for the Portarlington secondary school as it is the first time they have ever won an A basketball title.

While Portlaoise CBS were disappointed with the U-16 final, they rebounded to defeat Knockbeg College in the U-19 final.

Scoil Chriost Ri have a rich heritage of basketball and they also took part in U-16 and U-19 deciders – winning the latter.

This final was an absolute classic that saw a fantastic final quarter from Colaiste Iosagain result in them snatching victory.

The lead was out to seven points as we entered the final quarter but Colaiste Iosagain timed their run to perfection.

Solomon Udeze superb in defence throughout for the winners while Ultan Dunne, Ruairí Bourke and John Cooney all contributed with scores.

Tom Westman and Michael Luttrell had game time and made important contributions.

In a quality finish in the 4th quarter, Samuel Emmanuel hit two three-pointers for Portarlington to go ahead. Samuel put in a super performance and turned the game around.

Coaches Louise Foster, Conor Mitchell and Nick Cosgrove describe the Colaiste Iosagain group as ‘a super team to work with, great bond with the team’.

They now are focused on the All Ireland Quarter Finals in A as last year, this team won the B All Ireland basketball final.

Two Irish internationals went head to head as Portlaoise CBS and Knockbeg College clashed in the U-19 final.

Jack Kehoe from Knockbeg College, who plays National League for Carlow, and Cillian O’Connell, who does likewise for Portlaoise Panthers, have both represented their country in recent years.

They, and the rest of their team mates, served up an epic encounter that went right down to the wire.

Knockbeg had beaten the CBS in the group phase and began the game well – going 14 points ahead at one stage.

The CBS slowly fought back and Paddy Fitzpatrick deserves huge credit as he did a brilliant job curbing the influence of the excellent Kehoe.

A hard defence resulted in scores following down the other end as Portlaoise CBS came through.

They will now have a home quarter final in the new year while Knockbeg will be away.

The Senior A team led from start to finish against Presentation Kilkenny, leading 12 to 9 after the 1st quarter and 24 to 16 at the half time.

A very strong 3rd quarter stretched their lead to 16 and despite their outside shooting going cold early in the final quarter, they finished strong to win by 19 points.

The foundation of their victory rested on a very strong box and one defence coupled with multiple scoring threats from fast break, perimeter shooting and strong post play.

This was great win for a very young Senior A team and they now look forward to a home All-Ireland Last Sixteen game after Christmas.

The U-16 A team lost out to a strong Loreto Kilkenny side who played superbly throughout.

The Chriost Ri players will be disappointed with their performance in this final, starting very nervy and never getting to grips with the game especially on offence. Twenty five points is a very low score for this very talented team.

They qualify for an away All-Ireland Last Sixteen game after Christmas. Before that however, they have an All-Ireland Cup semi-final to look forward to in the UL Arena on Thursday December 8 against Mounthawk Community School, Tralee.

They will need to recover the excellent form that saw them overcome Cork schools St Angela’s and Carrigtwohill in the Last Sixteen and Quarter-Final respectively if they are to make it to the National Arena for the All-Ireland Final in January.