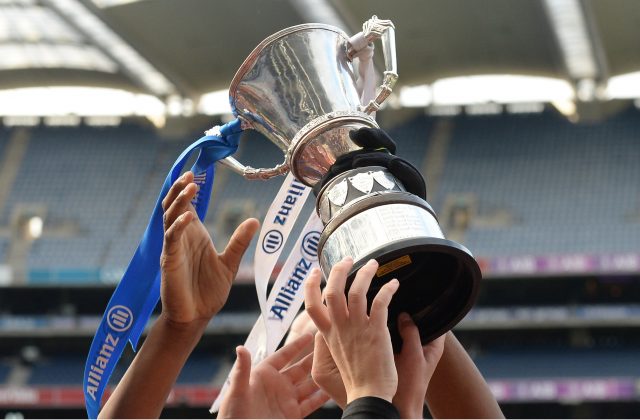 Laois Cumann na mBunscol have embarked on a new venture in an attempt to improve football and hurling in the county.

For the first time, they have run trials for pupils from all over Laois and have now picked a football team which are currently training together once a week in the Laois Training Centre.

Vice-Chairman of Allianz Laois Cumann na mBunscol, Shane Maher who is a teacher in The Heath NS, says that he feels the initiative will be a huge success.

He said: “In previous years, we have asked schools to send in players to us but what was happening was that we were getting all of the same type of player – typically a midfielder or a centre forward – so it was difficult to create a team without natural corner backs or the like.

“The panel are now currently training towards the annual Allianz Cumann na mBunscol Cill Chainnigh Festival of Football this June. We have fared badly down there for the last few years and we felt that our performance wasn’t reflected of the standard that existed in the county.

“So, the idea was sanctioned at committee level under our new Chairperson Monica Kennedy-Phelan and new secretary Padraic Bourke, both of whom are from Tipperary originally but are working in Castletown and Portlaoise ETNS respectively.

“The trials were open to every school in Laois; we currently serve 58 schools across a range of different activities. We had well over 100 at these and had a hard job whittling it down to 41.

“There are some superb prospects and if this initiative gets firing we should be delivering serious footballers and hurlers to the Laois Development Panels. There’s a definite sense of pride in being part of this Laois panel.”

Clough-Ballacolla native Maher revealed that this Allianz Cumann na mBunscol programme has received a lot of backing from teachers and coaches.

He said: “Coaching is now being provided by Colm Begley and James Kelly with Shane Smith also at hand as part of his work experience placement.

“Other teachers who have helped out include Liam Ahern, Mark Delaney, Kieran Lillis, Martin Carroll, Kevin Gorman and myself. We also had serious help from three St Mary’s CBS students and Heath footballers in Gareth O’ Brien, Neil Keane and Leon Holland.

“Neil is a minor footballer and Gareth is on the minor hurling panel; both are actually in Zambia at the moment as part of their TY year. “

Plans are also in place to have a hurling panel up and running shortly while Maher also told how many local businesses have come forward to sponsor the teams.

“We’re going to finalise a panel over the next 2 trials and we’re expecting a couple of dual players.

“We will be sourcing jerseys for all our players locally through Darren Strong Sports and we are hoping a couple of local sponsors might give us a hand with same.

“Hanlon Woodcraft based in Aghaboe, Ballacolla, have agreed to sponsor one set of jerseys and we have also kept other business local as we bought bibs, footballs and sliotars from Colgans.”