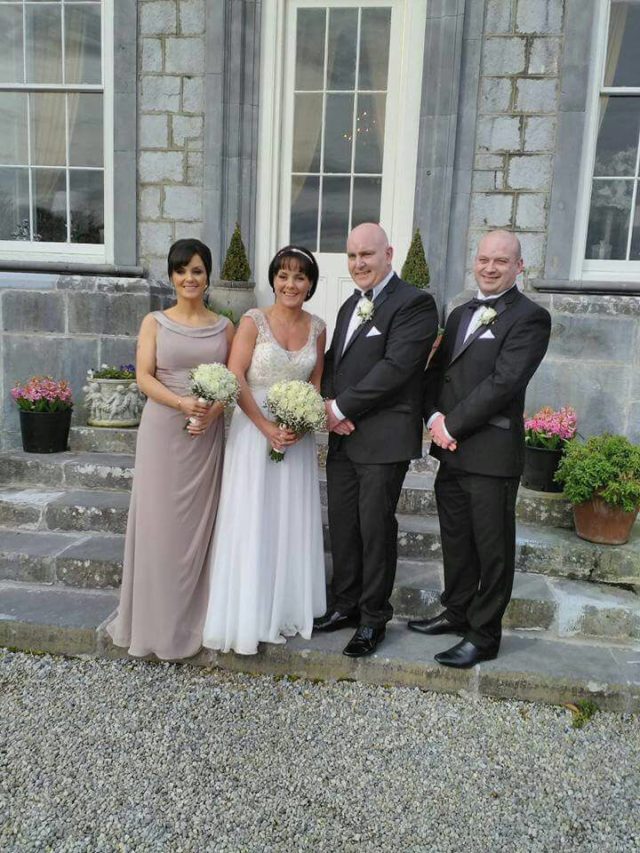 Timahoe GAA may claim lots of victories but one of its games led to a match of a different kind – the wedding of local woman Patricia Ramsbottom and Daniel Kelleher, a native of Macroom, Co. Cork. They tied the knot at a civil ceremony in Castle Durrow on Thursday, March 9.

Patricia works as a sales executive for Medtronic while Dan is a commercial manager in QK Meats. “We first met in 2001 at The Heritage Hotel after the football match.

“Myself and my sister Mary were out on the town for the evening and Dan who was working with my brother, Karol, at the time, came into the hotel and we met. However, we didn’t get together until April 2011 when Karol got married. We got engaged on April 24, 2016,” she says.

When it came to the wedding day, Patricia and Daniel wanted a relaxed ambience, surrounded by family and their closest friends, filled with laughter and fun.

Parent of the bride: Billy Ramsbottom, Patricia’s mum, Mary, passed away in 2012.

Parents of the groom: Pat and Noreen Kelleher

They drank: red and white wine and Prosecco for the drinks reception.

First dance: Swinging on a Star

Favourite memory: “When I got to the top of the room where we had the civil ceremony and I saw Dan and I held his hand,” recalls Patricia.

Dan’s favourite memory: When Patricia stood beside him after her father walked her up and she held his hand.

Honeymoon: Two weeks in Canada, taking in Whistler; Lake Louise and Vancouver. “We wanted something different and have always wanted to go there. We also were keen to try some skiing,” says Patricia.