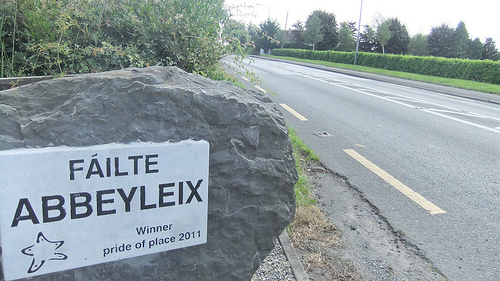 The final plans are being put in place for the Entente Florale international competition by Abbeyleix with the route for judging confirmed on Thursday.

Abbeyleix is one of two villages flying the flag for Ireland and the hard work has been going on for a number of months, now.

The local community has being going to great rounds to get everything ready in the town for adjudication on July 7.

On Tuesday night, extra help is being sought for efforts on the Ballyroan Road at 6.45 pm.

“Any volunteers that are available, we would be very grateful for their help. It is a case of all shoulders to the wheel at the moment,” said Abbeyleix Tidy Towns chairman Cllr John Joe Fennelly.

He said the heavy lifting has already been done and the bulk of the work is now complete. It’s now a case of fine tuning and focusing on attention to detail.

Works still to be completed include works to get the fountain working again and then a wash down of the impressive library in the town.

“ A lot of work has been done because we have been at it since January,” Cllr Fennelly said.

“There is still a huge amount of work to be done. A lot of small things need to be finished,” he said.

The adjudication lasts exactly four hours and has to pretty much run like clockwork. “We can’t deviate from that. We can’t be one minute below or one minute over,” Cllr Fennelly said.

The final route has now been set along which they adjudicators will be brought.

The adjudication will begin at the official flag ceremony at the 1916 Garden of Remembrance. They will then visit Heritage House before going to Fairways Estate on the Ballyroan Road. After that they will visit Dove House Sensory Garden before heading out the Ballinakill Road and stopping at Knocknamoe House on Temperance Street.

The group will then take in the Church of the Most Holy Rosary and then St Michael’s Church of Ireland graveyard. The adjudicators will then be shown Abbeyleix South National School and the local sporting facilities which cater for several sports.

The adjudication route will then take them to the Community Garden where lunch will feature some of the produce grown in the garden.

After lunch the adjudicators will view the Country Market in the square before visiting the award winning library.

The adjudicators will then meet for an hour and a half before giving their observations and holding a questions and answers session with the local committee.

After the long day, a banquet will be held in the Manor Hotel in the town.

“Last year we were only one point away from winning the best small town in Ireland award, which was won by Listowel. If we could hold that mark or improve on it, that would be brilliant,” Cllr Fennelly said.

Funding of €7,500 has been provided from the National Tidy Towns Association, which will be supplemented by additional funding from Laois County Council and local donations towards the participation by Abbeyleix.