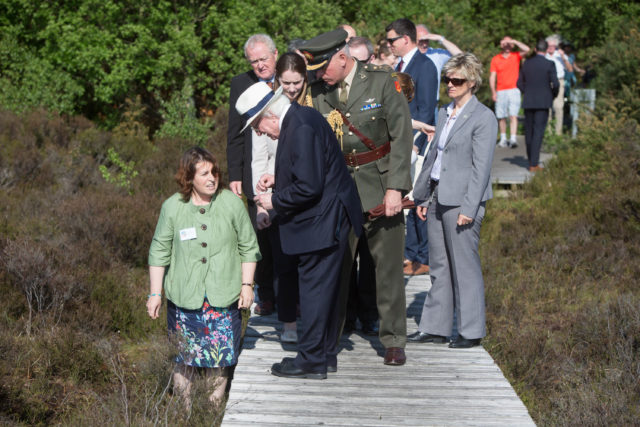 Tricolours were waved as enthusiastic cheering crowds greeted the visit of President Michael D Higgins to Abbeyleix on Thursday.

As the sun beamed down on the heritage town for the hottest day of the year, the school children who got time off school couldn’t contain their excitement.

“I wonder do they have guns?” said one when he saw President’s Aide-De-Camp and members of An Garda Síochana.

While another one of the group was undoubtedly impressed, he qualified his positive impression of the President somewhat. “He’s smaller than I thought”.

In Abbeyleix to launch the Wetlands Strategic Plan during national Heritage Week at the Abbeyleix Manor Hotel, President Higgins praised the local community in Abbeyleix for its efforts to “restore and reinvigorate Abbeyleix Bog”.

He described Ireland’s bogs as very “a very precious resource”.

He noted that there are 50 events behind held as part of the national biodiversity week.

Addressing the many local school children present, he said it was important that they grow up to be the activists of the future.

He said in previous decades there had been a rush to make everything productive with many declaring a gung-ho attitude of “don’t hold me back”.

Drawing the largest laughter of the day, President Higgins said: “It’s a pity we didn’t hold some of them back!”

He said he was looking forward to seeing “the fruits of the tremendous community initiative undertaken over the past number of years to restore and reanimate Abbeyleix Bog and its wetland habitat”.

“I am also conscious that Abbeyleix Bog is just one project that has brought together community activists, local authorities and state agencies in many locations around the country in a virtuous collaboration towards protecting and restoring natural wetland ecosystem,” President Higgins said.

Chrisy Uys formally thanked the president. “Today is a wonderful day for the wetlands community for the acknowledgement you have given us,” he said.

He said there is a challenge posed by climate change.

“We can all change that change, even if it just through two square kilometres of land, south of Abbeyleix,” he said.

A reading of a poem on Abbeyleix Bog by Aidan Lynam from Spink was enthusiastically received and brought a handshake and hug from the President and poet.

The President then viewed a number of local projects on biodiversity before paying a visit to the bog.

It was evident that President Higgins intended to make the most of his time there, as he donned a dapper Panama hat before taking to the boardwalk and staying well beyond the scheduled time for the visit.

He also chatted to Ricky Whelan, chairman of Abbeyleix Bog Project before departing.

The President got to view ‘Buginham Pallice’, an insect hotel which was created during a previous Heritage Week by around 100 children. “It was to show them that all wildlife needs a home,” Mr Whelan told the President.

When asked what he thought of the boardwalk by Mr Whelan, the President beamed “Oh, it was wonderful”.

He then heard of the wildlife evident in the bog at the moment including nesting long-eared owls, cuckoos and woodcocks.

And with that the President’s cavalcade left the bog and was on its way, leaving many memories behind for the schoolchildren and people of Abbeyleix.

Michael D Higgins in Abbeyleix
1 of 16