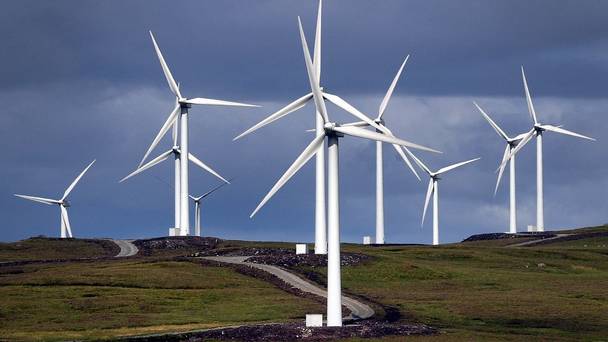 The Government have announced a raft of new restrictions for wind turbine constructions but have decided not to increase the minimum set back distance.

500 metres is the nearest distance that a wind turbine can be erected in relation to a house and this has not changed.

But these new rules are expected to limit the impact on communities affected by the rising number of wind farms in rural Ireland.

The new regulations, which were agreed at Taoiseach Enda Kenny’s last Cabinet meeting, include one which states that turbines will also have to be built a distance of four times the height of the turbine from residential areas.

This means a 150m wind turbine would have to be constructed at least 600m from the nearest home.

There will also be stringent restrictions on noise levels from high-powered turbines, which will impact on the number of turbines that can be built in one area.

Local authorities will be tasked with enforcing noise limit rules in their counties and the Environmental Protection Agency will be charged with policing sound levels.

Breaches of noise restrictions will result in turbines being turned off.

The noise levels are based on standards set by the World Health Organisation.

The maximum noise level permitted will be the same for both night and day, opposed to two different levels as is currently the case.

The guidelines insist shadow flicker should be eliminated through “technology and appropriate modelling at design stage” and if it does occur turbines should turn off automatically.

Wind farm companies will also be required to hold “constructive consultation” with communities before applying for planning permission.

And energy firms will be obliged to pay a “community dividend” to areas affected by the construction of wind farms.

“It is proposed that developers will need to offer a form of community dividend that will ensure the project will be of enduring economic benefit to the communities concerned,” the guidelines stated.

The draft Wind Energy Development Guidelines will now be sent for consultation and are expected to be passed into law in the next six months.

He said: “The Government’s long awaited guidelines don’t go far enough and do not give protection to rural dwellers in terms of setback distances.

“While the measures in relation to restrictions on noise levels and shadow flicker are a step in the right direction, the setback distances are totally inadequate.

“A guideline for giant turbines to be set back a distance of only four times their height is useless.

“In practice this means that a huge turbine over 150 metres in height need only be set back 600 metres from houses. This will not be acceptable to residents. Only the Wind Farm developers will be delighted with this.

“The proposed guidelines do not include a requirement that wind turbines can only be located in areas zoned for that purpose by County Councillors in County Development Plans.

“The Government needs to strengthen these and implement them as soon as possible. Rural communities in Laois and Kildare should not have to endure monster turbines being constructed on top of their homes.”

History of wind in Laois

Wind turbines have been a hot topic in Laois for a number of years.

In March, Laois County Councillors voted not to allow any part of the county be zoned for wind turbines at their development plan meeting.

In what was a significant development, it meant that planning permission won’t be granted for new wind turbines in any part of Laois.

The Councillors voted 10-6 in favour of the motion, with three councillors – Padraig Fleming, Seamus McDonald and John Moran – absent.

Before that however, Coillte secured permission for 18 wind turbines and associated development on lands at Cullenagh, an area close to Timahoe and Ballyroan.

But the win farm has been the subject of a number of legal challenges and in March, a High Court judge asked the Court of Justice of the EU (CJEU) to decide issues concerning Coillte’s environmental responsibilities in relation to grid connection works for a wind farm in Laois.

Also in March, an application to erect a wind turbine in Laois has been rejected by An Bord Pleanala.

This was an appeal by Andy Dunne of 7 Kellyville Park, Portlaoise, Laois against the decision by Laois County Council to refuse permission on July 28, 2016.

He had proposed to construct a 500kW wind turbine with a hub height of 65 metres and an overall height of 93.5 metres.