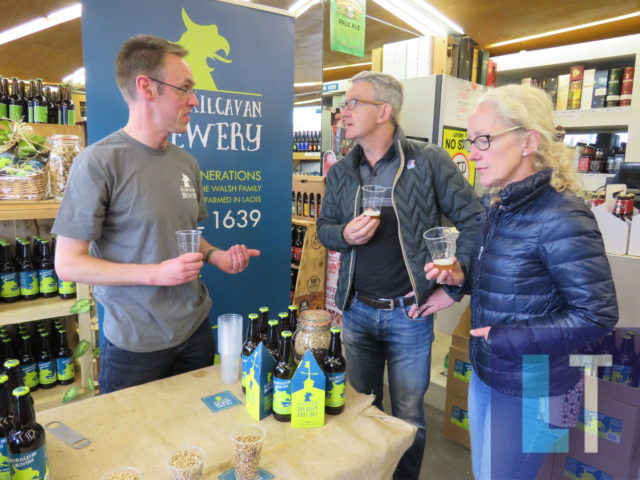 On Friday evening David Walsh-Kemmis officially launched the first product from the Ballykilcavan Brewery in Egan’s Off Licence in Portlaoise.

For David it was a day that has been planning and building towards for a long time, since he took the decision to diversify from a long-standing tradition on the Ballykilcavan farm between Stradbally and Athy. David is the 13th generation to farm the land but he and his wife Lisa have taken the decision to go down this route by launching a craft beer brewery at the farm and he also has plans to develop a visitor centre and a range of tourism ventures.

While the beer is currently being brewed in Sallins, it will in time be brewed on the farm and David himself is a qualifier brewer.

The beer launched on Friday is called Bin Bawn pale ale and is said to have a sweet malty base which is balanced by three different types of hops to give it a fruity aroma and clean finish.

The beer is named after the scenic Bin Bawn field at Ballykilcavan farm which has been owned by the Walsh-Kemmis family since 1639.

He was in Egan’s Off Licence on Friday and Saturday between 6 and 9pm on both evenings doing tastings and explaining the story behind his business to would-be customers.

The Bin Bawn ale is available to buy in bottles at the moment and will be on draught in local pubs in the coming months.

Our photographer dropped in on Friday evening.

SEE ALSO – The Sunday Interview: David Walsh-Kemmis and his big plans for a brewery (and a whole lot more) on his farm in Stradbally