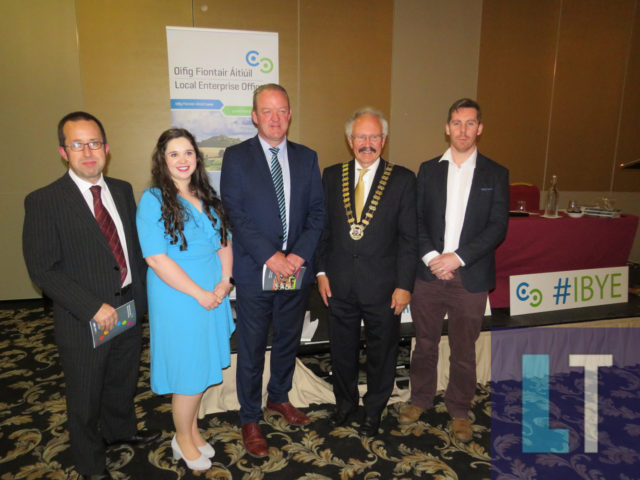 Former Irish rugby player Mick Galwey was the guest speaker at a networking event in Portlaoise on Wednesday evening, organised by the Laois Local Enterprise Office.

The Kerry man – who now lives in Kilkenny – was capped 41 times by Ireland, captained Munster for eight seasons during his 17-year career and also played for the Lions in 1993. In addition he olds the notable distinction of having also won an All Ireland football title with Kerry in 1986.

Galway, who now works for Netwatch, a Carlow-based remote visual monitoring business that have clients all over the world and spoke on the topic ‘lessons from sport which helped my business career’.

Including a selection of funny stories from his playing days, he highlighted the importance of teamwork, vision, passion, leadership and delegation.

He also spoke of how important it was to know your opposition as well as the importance of praising achievement and celebrating success.

Prior to Mick Galwey speaking, LaoisToday owner Steven Miller interviewed Kelly Ging on stage about how she built her business, Kelly Lou Cakes, from small beginnings in 2011 to a point where she now has five staff and reached the national final of Ireland’s Best Young Entrepreneur (IBYE) competition this year, the first Laois person to get beyond the regional section.

Kelly told how she opened a coffee shop in a small corner of the family business – Ging’s Hardware store in Kealew Business Park in Portlaoise – in 2011 and how she kept her business open in 2013 despite the heartbreaking closure of the Hardware side.

She told the audience of her journey through the Laois and regional section of the IBYE and how the €15,000 prize fund from winning Laois has played a key part in pushing her business to the next level. She also said she had plans for expansion and that there will be news in the coming months on that front.

Evelyn Reddin officially launched the Autumn training schedule – which includes a variety of heavily subsidised courses – while the certificates for the courses held in the earlier part of this year were also presented.

The event was hosted in the Midlands Park Hotel and among the attendance was new owner Colm Neville.