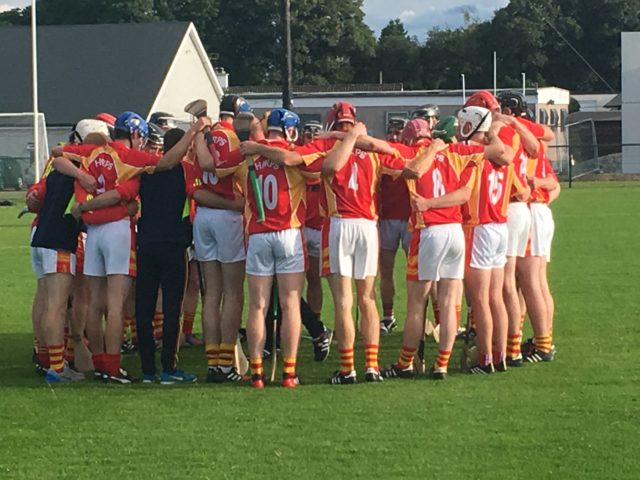 Slowly but surely the GAA season is winding down but today is still a big day for a number of teams.

Emo and The Harps are both in Leinster intermediate championship action while Rosenallis and Na Fianna Og will do battle again in the U-21 ‘B’ football championship semi-final replay.

The Harps v Kiltale (Meath) in Navan at 2pm

The Harps were knocked out of the semi-final stage of the Laois SHC ‘A’ eight weeks ago by Ballyfin Gaels but represent the county in Leinster as the Gaels teams aren’t permitted to do so.

In fact the Laois final was an all-Gaels affair with Colt Gaels meeting Ballyfin Gaels, meaning a playoff was required to decide who went into Leinster. Rosenallis, however, opted not to take part in it and The Harps were give a straight passage through.

It was a disappointing season for them, one which saw them buck the trend of defeated senior teams going straight back up. While they won promotion back Division 1 of the league even that was an unsatisfactory end as they were awarded the game due to Colt’s decision not to fulfil the final after a dispute over the fixture schedule.

In any case they make the long trip to Navan today to take on Meath senior champions Kiltale, a side that have won the last four Meath titles and five of the last six years. Kiltale have enjoyed a good run in Leinster most years too, beating the Wexford champions on a couple of occasions and only losing out to Kilkenny’s Carrickshock last year in the semi-final, Bennetsbridge in the final in 2015 and Mullinavat in the 2014 final. The Meath side are also well used to Laois opposition having beaten Ballinakill in 2014 and Portlaoise in 2015.

It’s a tough task for The Harps but if they hit form they could set up a very interesting semi-final. The winners of this game play the winners of Kildare senior winners Ardclough and, wait for it, Ballyraggett!

Emo is the place to be this afternoon as they host Leinster club championship action for the first time ever and welcome Dublin representatives Ballyboughal for the provincial quarter-final.

Emo just about got the better of Wicklow side Hollywood last weekend and can expect another tough challenge today. Ballyboughal were beaten in the quarter-final of the Dublin championship by Na Fianna’s second team but because all four Dublin semi-finalists were second teams and they can’t play in Leinster, a playoff was needed to see who would go through.

Ballyboughal did enough, beating Trinity Gaels 5-14 to 3-10 in the first game and then Naomh Fionbarra by 2-12 to 1-14 in the decider. They don’t have any big names but Emo can expect to come up against a decent side, one that have been towards the top of the Division 3 league in Dublin, the main league for intermediate sides.

Emo have battled hard to get this far with a commedable aspect of their displays their capacity to come good in the second half of games. They turned things around after half time in their Laois semi-final win against Timahoe, rescued the final late on against Portlaoise, demolished them in the second half of the replay and then left it late to get the better of Hollywood last week.

Emo should have a decent chance today with the prize for the winners a home semi-final against O’Connell’s of Louth or Curragha of Meath next Saturday.

These sides played out a dramatic draw last weekend with Rosenallis seemingly on course for a final place only for Na Fianna Og to strike late to force a replay.

The likes of Joseph Shelly, John Lennon and Cormac White all played intermediate with Rosenallis this year while the Baldwin twins and Cialann Mulhall impressed with Barrowhouse and Arles-Kilcruise respectively.

Na Fianna Og are a combination of the two Arles clubs and Barrowhouse and the prize for the winners here is a final place against Ballylinan. That would be a tasty final if Na Fianna Og were to come through but our fancy is for Rosenallis to finish what they started last week.