The recent incidents of people driving quad bikes on The Heath has prompted a local archaeologist to question if the area’s archaeological significance is fully understood.

The recent reports concerning recreational uses of the Heath raises a question of whether we know enough about the archaeological significance of the Heath as part of heritage of county Laois.

The Heath is a unique archaeological landscape whose character is defined in no small part by the series of prehistoric burial sites that are visible on the ground surface. These burial sites, called ring-barrows, are circular shaped ditches with a low raised earthen bank around the outside.

In some parts of the country, the Heath in County Laois being one, the concentration is such that they are classed as prehistoric cemeteries. This place was a commemorative burial space, where agricultural communities in the Bronze Age (c.2200BC-500BC) came together to bury their dead.

There are fourteen known ring-barrows dispersed around the Heath, but there is potential for other archaeological material to survive below the surface. This archaeological landscape has a time-depth indicated by the range of archaeological monuments dating to different time periods on the Heath, with some monuments used and re-used by different generations of the local inhabitants.

What lies beneath the sometimes shallow, always protective topsoil, may tell us more of county Laois’s wider European connections.

The many commuters and visitors who travel along the M7 to the west of the Heath, may be unaware of the range of archaeological sites identified and excavated a decade ago (2007) as part of the Transport Infrastructure Ireland’s (formerly NRA) construction of the motorway. Two main areas of Morrett and Ballydavis contained a range of archaeological monuments from different time periods.

The stretch of motorway closest to Morrett to the north of the Heath contained two burnt mounds, two fulachtaí fia (cooking sites), a burial of a young adult (probably female), a corn drying kiln and an ancient road that showed a history of usage from medieval to modern times. Some of these sites are representative of the activities of Bronze Age people living within the area of the Heath. 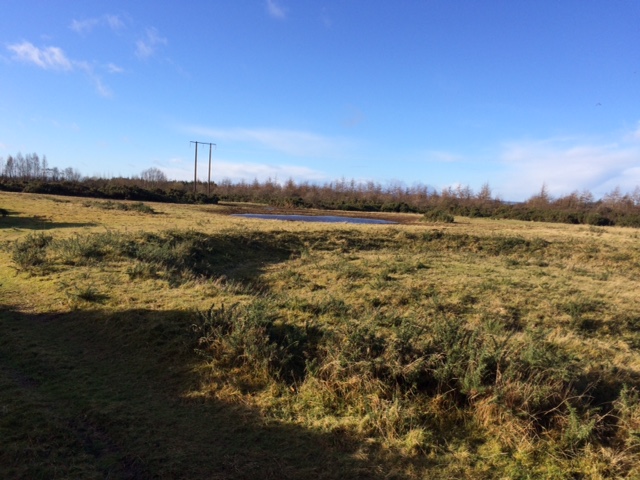 At the area of Ballydavis within the footprint of the motorway, four ring-ditches and seven furnaces were excavated dating from the Bronze to the Iron Age. The furnaces show evidence of iron smelting at the site and one of the ring ditches contained a central burial with cremated human bone within a small bronze box. The closest parallel for the bronze box is the chariot burial of a young female in Yorkshire, England.

The Heath has a mixed legacy of modern recreational use, from horse racing to golf course. As has happened around the country, occasionally archaeological monuments were incorporated into later land use, as was the case with the ringfort (typically early medieval habitations) being used as a feature of the golf course.

The Heath is an under-researched archaeological landscape of prehistoric activity, where local communities worked their metal, buried their dead, traded goods and farmed in different ways through the millennia.

The monuments on the Heath and the excavations associated with the motorway tell us this story and much more. But the area of the Heath, between and on the fringes of these monuments, could potentially tell us more. The evidence is sealed under the protective topsoil cover, a cover that can be quite shallow in places and easily damaged by over use of motorised vehicles