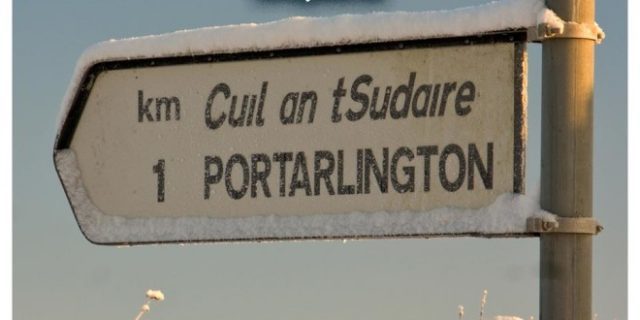 The claim was made at this afternoon’s Municiple District meeting of the Portarlington-Graguecullen area by Sinn Fein Cllr Aidan Mullins.

He said: “I am bombarded with complaints from the people of Portarlington about the travellers. It is not discriminatory for me to say this.

“I am talking about misbehaviour, threats being made to locals and members of the council.

“This is a major problem and is particularly serious in Portarlington where it has been going on for years. The community are inflamed over what has been allowed to develop.

“This is not anti-traveller. Everyone has the right to have their housing needs looked at and dealt with without discrimination.

“I put in this motion to deal with where these dwellings are parked illegally in any public space and even on private property.

“These actions are alienating the entire community, they are causing bad feelings and resentment. The local Tidy Towns didn’t put an entry in last year, this is one of the reasons.

“I’m not targeting all the travellers. I have made representations here on behalf of them before. We have settled travellers in Portarlington and they are brilliant.

“But I am talking about the ones who are coming in with temporary dwellings and are holding the community to ransom.”

Cllr Mullins’ motion called on Laois County Council, in conjunction with the Gardai, to agree a common strategy and procedure to deal with temporary dwellings in Portarlington and other areas.

Last week, three caravans were removed from the site along the Canal Road, where they had been parked for over two years, because they were obstructing the construction of the new school.

Cllr Mullins told the meeting that tonnes of rubbish were left behind which had to be removed by a contractor. He also said that only for the new school, he doesn’t think the temporary dwellings would have been removed at all.

He also told of the problems that Portarlington GAA club are experiencing.

He said: “I think there are now four caravans in total on the GAA property. They have complained to the council, to the gardai and nothing has been done about it.

“There is a shed erected at the main entrance to the GAA entrance and it is better than anything I have at home. The GAA club are now looking at having to get a court order which is very costly and they can’t afford it.

“If I or anyone else did these things, I would be arrested. So I can’t understand why it is one rule for some and another for the rest.

“The Housing Miscellaneous Act allows the owner of a property to complain the the Gardai about trespass. The Gardai have the power to go along and demand that they move and if they refuse, they can impound those temporary dwellings.

“They have the power but it is never used. It cannot be tolerated.

“I dealt with a case last year where someone moved a caravan onto a private site beside where their parents owned and the council were onto them in a flash that they had no planning permission and they had to move.”

Cllr Mullins said no agency wants to deal with this problem.

He said: “Some of these people in these dwellings are burning rubbish in their gardens and nobody ever does anything about it.

“I thought long and hard about bringing this up here but it is the elephant in the room and nobody wants to address it.

“So I am calling for a meeting with the relevant sections of the council and the Gardai. Because the Gardai are running away from this as well.”

Cllr Tom Mulhall revealed that he wrote to and spoke with the Gardai in the station and says that the superintendent will meet with the Council and other officials.

He said: “I support Cllr Mullins fully with this. There are temporary dwellings parked in very inappropriate positions.

“These are temporary dwellings parked in a very inappropriate place, they have made it their own with portable toilets, sheds, animals, ducks, chickens. There is a road safety issue because their children are very close to the road.

“This is not discrimination, but an ideal location needs to be found. They are parking at Odlums, the GAA grounds, close to residential houses. They have a place in the middle of the town for horses and sulkies going around the town. This is not good for Portarlington.

“I’d be afraid that this would get out of hand, that members of the public would take the law into their own hands

“We have requested a meeting with the relevant persons in Laois County Council and Portarlington Garda Station say they are only too willing to discuss this issue over here.

The reply from Ms Daly, Senior Social Worker with the council, is that “the parking of temporary dwellings will be dealt with on a case-by case basis, in accordance with the relevant legislation. each case will have its own individual set of circumstances in relation to accommodation needs, location, road safety and possible environment issues”.

A meeting with all relevant Council Sections and the Gardaí is being arranged.