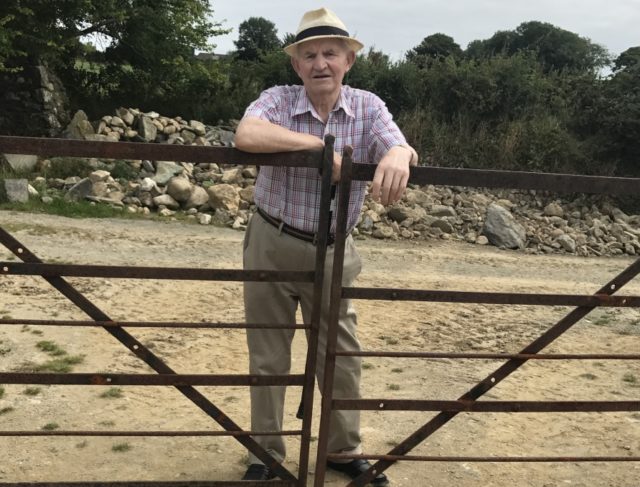 Michael (Mick) Mooney, Ashfield, Ballickmoyler, Co Laois, who passed away peacefully at his home, surrounded by his loving family, on Monday, March 19 had been in failing health since October of last year.

The Funeral Mass of Mick, who was born on July 20th, 1933 at Sidegate, Moneenroe in Co Kilkenny, took place in the Sacred Heart Church, Arles on Wednesday morning, March 21.

Mick was a hard-working family man with a warm and positive attitude to life. He had an incredibly sharp wit and ability to sum up a situation in a few short words.

The life and times of Mick were eloquently captured in great detail by his youngest son Edwin in the following eulogy.

Horse and cart, milking cows and saving hay. The bushman, the scythe, the billhook.

Bagpipes, accordion, tin-whistle, mouth organ – a dab hand at them all.

Work boots on at 14. Off to Flemings Fireclay on your bicycle.

Clay pipes, gullies and Armstrong junctions – a master at his craft.

Hard work and devilment working on the loft.

Mick and Kathleen, you started the voyage.

Home in 5F The Swan.

Cows, calves and plenty of hardship.

The trowel, the hawk and the spirit level. No problem, new house, new home!

The open fire, the range and the stove – smoke, smoke and more smoke.

The spade, the hoe and the watering can. Potatoes, cabbage, carrots – we never realized how good we had it.

Make, model – new or used was not a problem.

Handbreaks, exhausts and room for 9 – were often a problem.

A boot big enough for the shopping, the sheep, the calves, a weanling or two – were often a bigger problem.

Sitting in the passenger seat was always a problem.

Apple tart, currant cake, ‘a pudding for two’, a sweet tooth was his only downfall!

A million cups of tea, that’s 2 million spoons of sugar – but who’s counting.

Large ones, small ones or smokes – were never his thing.

Kilkenny in hurling, Laois in football, Arles-Kilcruise for the chaps, The Railyard back in the day. ’Rise a row or we’re bet!’

News and weather – as often as humanly possible.

Sport – of any kind.

Volume up to the max – in all cases.

Mass on a Sunday, Holy Hour on a Monday, hymns in English, Irish and Latin with the Rosary everyday.

A gift of deep faith cherished from an early age.

Mick and Kathleen, you certainly have your own crew.

‘I say I heard you the first time’.