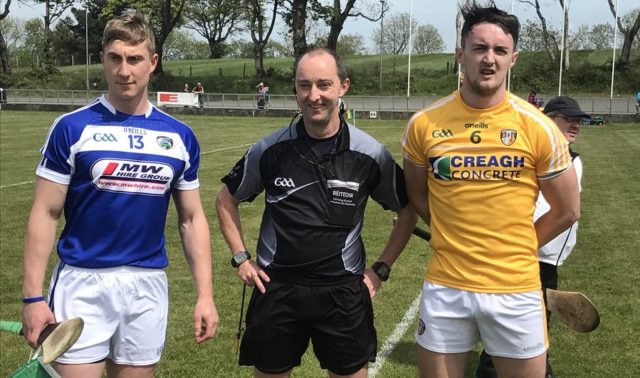 Laois are back in the reckoning for the Joe McDonagh Cup as Eamonn Kelly’s men ground out a one point win over Antrim this afternoon.

Laois played the last ten minutes of the game with 14 men after Lee Cleere was sent off and despite leading by five points as we entered second half injury time, they just held on to win by one in the end.

There were heroes all over the pitch. Enda Rowland made brilliant saves in the goals while captain Ross King ended the game with 11 points.

They started the day bottom of the table with Antrim top but now they are back in it with games against Meath and Carlow to come.

Laois played against the breeze in the first half and went behind to a Coor Johnston point.

Ross King levelled things up but Neil McManus regained the lead for Antrim before he and Donal McKinley moved them 0-4 to 0-1 ahead after ten minutes.

Laois were using Paddy Purcell as a sweeper against the wind and he picked up a lot of loose ball and used it intelligently to set up Laois scores.

He pointed after a fine run while Ross King and Willie Dunphy also split the posts to tie the game at the midpoint if the half.

Ross King then moved Laois ahead but Eddie McCluskey tied the game soon after. King and Johnston then exchanged points before Laois got on top in the final quarter of the half.

Conory scored again but Antrim ended the half on top. Neil McManus drew a brilliant save from Enda Rowland from a 21 metre free but he pointed the resulting 65 to leave it 0-11 to 0-8 at half time.

They carried that into the start of the second half as Neil McManus landed three more frees to level the game within minutes of the restart.

Laois were looking shaky but the game’s opening goal settled them down. Ben Conroy did brilliantly to turn over an Antrim defender and he found Willie Dunphy 14 metres from goal and he fired low to the bottom corner.

Enda Rowland was making full use of the wind now and his puckouts were landing around the Antrim 14 metre line but the next score came via a Neil McManus free.

Ross King replied with one after Neil Foyle but Conor McCann left two between them as we entered the last 20 minutes.

Conor Johnston’s third point left one between the teams but Ross King soon had his eight point after an Antrim defender overcarried the ball.

McManus reduced the arrears again but two points from Ben Conroy in a matter of second left three in it again as we entered the closing 15 minutes.

Paddy Purcell and Nigel Elliott traded points before McManus’ tenth point made it 1-16 to 0-17 after 58 minutes.

Laois were then dealt a major blow as Lee Cleere was sent off for a wild pull and McManus tapped over the resulting free.

Laois were in trouble now but a brace of frees from Ross King left the goal between them again as we entered the last five minutes.

King hit another after sub Paddy McCane was fouled and Laois sub Aidan Corby left five in it as we entered the first of four minutes of injury time.

But Antrim refused to go away. Sub Ciaran Clarke caught a high ball and drove it to the net to make Laois sweat.

James McNaughton left one in it but time ran out and Laois held on for a crucial win.