Arles-Kilcruise have gone top of Division 1B following a hard-fought win at home over fellow contenders Emo this evening.

Two second-half goals were the crucial scores as Arles-Kilcruise held off a good Emo comeback to claim the points on offer.

Arles led 1-4 to 0-6 at the break, their first-half goal coming from Kevin Meaney.

An early goal from PJ Lawlor and points from Meaney, Chris Conway and Fran Egan helped them to a six-point lead at one stage.

But Emo battled back well with Paul Lawlor to the fore and the drew level before a goal from sub Conal Brennan after good work from Stephen Miller ensured the win.

Arles’s win, coupled with Ballyroan’s loss to Rosenallis, means that Arles are now top of the table with five games remaining.

Arles-Kilcruise play Killeshin on Tuesday of next week while Emo are at home to Rosenallis on Thursday. 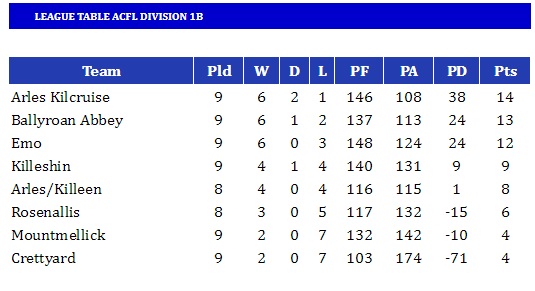 While Liam Irwin’s Ballyroan-Abbey side defeated his brother Johnny’s Rosenallis team by three points the last time these two sides met, it was Johnny who walked out of Rosenallis victorious tonight after his side recorded a two-point win over his home club.

Ballyroan were the first to get a point on the board with Padraig McMahon kicking his first of three. Rosenallis followed with a fifth-minute free by Donal Lalor which was met by another Ballyroan point, this time from Ciaran Carroll.

Lalor added his second for Rosenallis with Mark McDonald scoring for Ballyroan.

Rosenallis did all the scoring in the last 10 minutes, with points from Lalor, Brian Fitzpatrick and Paddy Keating to push Johnny Irwin’s side two points ahead at half-time.

Donal Lalor opened the second-half scoring with a point from play which was following four minutes later by a point for Ballyroan.

Lalor and Ronan Murray both added one each to the board while McMahon converted at the other end of the field.

Ballyroan had former star, 44-year-old Noel Delaney, in their ranks as they were short on numbers and he kicked a point but Murray stepped up again with two more points, while his two points were met by Liam Delaney, Colm Kinsella and Caroll.

The final five minutes saw the sides go back and forth for points with youth stepping up for Rosenallis through Adam McDermott and Glen Shaw points.

In the end it was Rosenallis’ twopoint lead from the first-half that got them over line and the final score finished Rosenallis 0-13 Ballyroan 0-11.

In the other Division 1B games this evening, Mountmellick were beaten 3-16 to 3-10 by Killeshin while Arles-Killeen beat Crettyard 3-9 to 2-8.

With Rosenallis winning, it means Mountmellick and Crettyard are now tied at the bottom of the table.