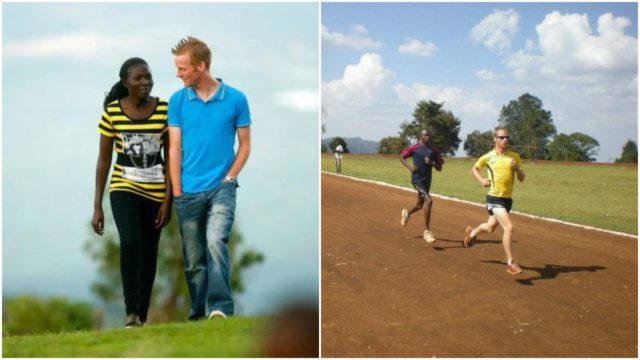 Ballyfin man Ciaran Fitzpatrick moved to Kenya in 2011 to pursue his running career.

However his path changed when he was offered a coaching job with the Kenyan cycling team and he hasn’t looked back since.

Ciaran has since met and married his wife Nelly in Kenya but admits he wouldn’t mind seeing a bit of hurling out in the East African country.

I started living in Kenya full time in 2011. I had been coming and going as much as I could afford. I’d work for a few months sub teaching and then when it was finished come out for two to three months. Then it was back home to look for more work so when I got offered a job here it made sense to stay.

How did you end up in Africa?

I had notions that I could be a pretty good runner so I came out to Iten, Kenya to see if I could train with the Kenyans and improve that way.

It didn’t work out as planned but I bumped into the right people, one of whom, the founder of Kenyan Riders cycling team, offered me a job as a cycling coach. I didn’t know a whole lot about cycling at the time but I gave it a go and I’m still here seven years later.

What’s the best thing about living in Africa?

The weather’s pretty good here so that’s handy, pace of life is a bit more relaxed here and I have a job in sport which isn’t easy to find. The fact that I met and married my wife, Nelly, here probably shades it though!

I usually come home twice a year in August and December so it’s been a while since I’ve seen a Laois match! Despite the cold, Christmas is better at home; it doesn’t feel like Christmas when it’s hot.

You can buy your food from a machine in McDonalds or some of the shops if the thought of speaking to another human scares you. I don’t think that’s a good thing.

Not to take myself too seriously and to be more open to differing opinions – standard enough stuff as you grow up; I don’t think coming over here has had any profound effect on me.

Going out to Kenya to run and getting offered a job as a cycling coach was pretty strange. They kept me on and I’m happy so it worked out well enough but it was a funny one to explain that I’d got a job in cycling when I wasn’t in any way involved in the sport up to then.

Brother Colm O’Connell, the famous running coach lives in Iten also so I see him regularly. Other than that I’d usually bump into a few throughout the year. There’s always people coming over to run for a few weeks and then going back so I’d meet a few Irish along the way. I don’t think I’ve met anyone from Laois here since a few friends and family came over for my wedding a year ago.

Probably. I’ve no immediate plans to do so but at some stage I reckon it’ll make more sense to move home than stay here. My current job suits me very well but if that changed it would be hard to find another to match it without going to the capital city, Nairobi, which doesn’t appeal to me at all.