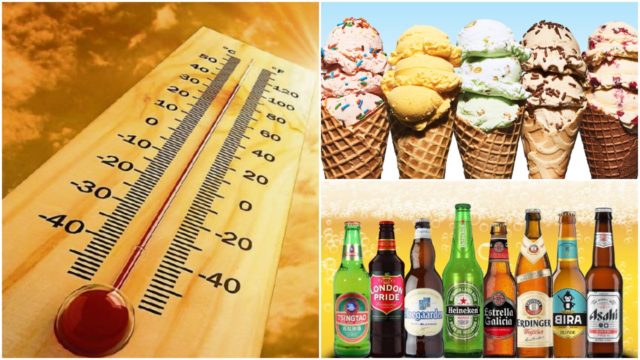 Panic buying and mad hysteria has overcome the people of Laois as paddling pools, ice-creams, fans, barbecue supplies and chilled beers are selling out by the truckload.

As Laois hits the hottest temperatures in the Midlands, residents in villages and towns all over the county are stocking up on what are now deemed as essential supplies.

LaoisToday.ie rang some local businesses to see what the extent of the demand for supplies has reached.

“There are no large paddling pools left – only kiddy pools. There are only two fans left,” said a spokesperon in Argos, Portlaoise.

Olive Cuddy from Telford’s Portlaoise said that fans, refrigerators and paint have been the big sellers this week.

“People are actually buying fridges and freezers to have more room for cold food. We ordered 100 fans during the week and there are only a few left in stock now. The paint counter has been flat out this week, too,” Olive said.

Bosco’s Portlaoise has seen a huge increase in the demand for water and ice-cream.

“The biggest increase is in water. We’ve ordered a pallet of water which is 100 cases of two litre water bottles,” said owner Bosco Ramsbottom.

Ice-cream sales have also gone through the roof. “We’ve upped our deliveries from twice to three times a week, with 15 cases coming on each lorry,” added Bosco.

With every man, woman and small child organising multiple barbecues over the past week, a spokesperon from a local SuperValu said that barbecue sales have gone ‘out the door’.

“Barbecue equipment has gone out the door. We’re selling so much water, BBQ meats and the deli is very busy too – people are buying a lot of coleslaw.”

John Egan from Egan’s Off Licence in Portlaoise described the June conditions as being ‘the perfect storm’ for the business. “A 40 foot container came this morning. Cider flew out the doors last week. The good weather, holidays and the World Cup – it’s a perfect storm,” said John.

LaoisToday will keep you up-to-date with any reports of mothers fighting over the last fan outside of Argos.