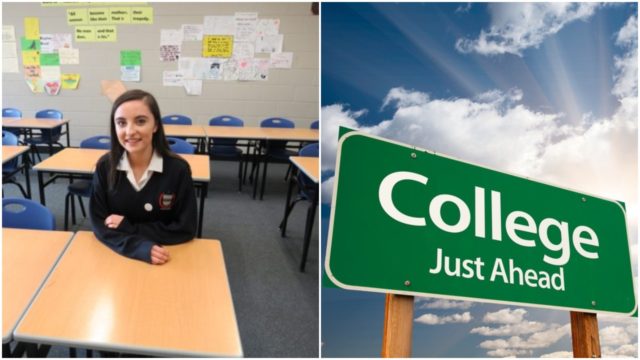 A year ago, I finished the Leaving Cert.

A week ago, I passed my first year of college. A year isn’t long, not in the grand scheme of things nor the smaller one. But the cliché is right – a lot can change in those twelve months.

Particularly when you move away from home and dip (or stub) a toe in the world of adulting while still forging three course meals from single packets of KOKA noodles.

It goes like this: you grow up with Portlaoise as the centre of your world and then you go off somewhere else and realise that, in reality, most of the world doesn’t even realise it exists on their map.

‘Laois? That’s above Dublin, is it?’
Yeah, no that’s Louth. But close enough.

You embark on this pilgrimage of geography teaching and you adapt to your world’s new centre, to its new standards. Its norms. Its notions of having more than one Supermacs in any given place.

You experience this bizarre situation of encountering hundreds of people each day, but only knowing the names of about five.
Of course, it all depends on where you’re coming from.

I, for example, was the big fish in an averagely sized pond. It was more of a little lake, really. I loved school and I loved the people in it and I felt like those people knew me, like everyone did.

Because they did – they do. Everyone knows everyone here. Some people hate that. I love it.

Because I was coming from more of a lake than a pond, I thought the college experience would be much of the same. I expected us all to know each other by November, December max. We didn’t. We don’t.

When you’re in school with someone, you speak the same language as them. In college, it’s as if you speak a different one with each person you stumble across.

There exists this menagerie, this assembly of young people who all react entirely differently to standing on their own two feet for the first time in their lives. For the longest time they’ve had to yet.

There are the ones who, prior to now, have never been allowed to so much as look at a pub. These people are to be feared. They each have a favourite brand of cider, and they each will stay in the club until the lights come on. Every. Single. Night. They’ll also still make it to their nine o’clock lecture before you do.

Then you have the ones who are involved in every club and society. They who canvass and protest for and against absolutely everything. They too are to be weary of, for the simple reason that they are all probably members of Young Fine Gael.

And then you have the ‘me’ type, ie. the type who felt liked in school, who got on ‘well’ in school, who was involved in everything in school… and who went to college with no battery fluid left from the fourteen years previous.

But I’m getting there. I may only properly know the owners of about five names from that pool of hundreds, but I’m fairly sure they’re the best of the lot.

That, paired with a heaped pass means I’m a very happy egg looking back on my first year of last minute assignments and Boojums at Sparch.

So, in the sense of Supermacs quotas and Portlaoise Awareness Levels™, you see change. And yet, nothing has actually budged.

Because you come home and everyone and everything is still here. There are still scraps on main street. There’s still a tweeting priest. There’ll always be someone who’ll put a goldfish in the Tesco fountain, as will there always be someone there to get it out.

And it’s actually kind of lovely.