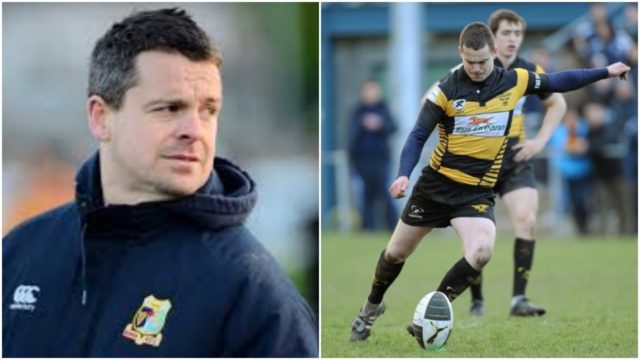 Rugby has taken Alan Kingsley all around the world and back again.

Now, the 35 year old has managed to add another notch to his coaching career after being appointed as the specialist attack and kicking coach with Welsh professional side The Dragons.

Kingsley, who was kicking coach with the Leinster U19 and U20 squads, joins the Guinness Pro14 outfit as part of a coaching reshuffle.

A career on the rise

A former out-half with Young Munster and Garryowen, Kingsley is one of the finest rugby players to ever come out of Laois.

He came up through the Portlaoise ranks, making his first team debut as a teenager and playing in a Towns Cup final in 2001 when he was still in secondary school.

They lost that final but he was there two years later when they got their hands on the coveted trophy for the first time in over 20 years.

He moved to Garryowen in Limerick where he spent a couple of seasons before then switching to their city rivals Young Munster.

His career then went international when he accepted an invitation to play with the University of Western Australia in Perth.

Initially he was only supposed to stay for three months but he stayed Down Under for over three years.

There, he played against the likes of David Pocock and Nick ‘The Honey Badger’ Cummins and in that first season he helped them win a Western Australian title for the first time in almost 40 years.

While there he also had a role with the academy of Australian Super Rugby franchise Western Force before moving home to accept a position as head coach with Navan who were in AIL Division 2C.

He guided them to back to back promotions while also combining roles with St Mary’s in the Leinster Schools Senior Cup, the Leinster Academy and with the Dragons last season.

Kingsley flew over to the Dragons as they returned for pre-season earlier this month and has assumed coveted position under former Leinster and Ireland hooker Bernard Jackman.

He spoke to the42 about this huge opportunity in his coaching career.

“I was involved in the underage set-up at Leinster and around the seniors a bit, but an opportunity like this is massive,” Kingsley said.t

“It was a no-brainer to come over and it’s been a great start. They are long days in pre-season at the moment and it’s all rugby, rugby, rugby but it’s really enjoyable.”

Head coach Jackman was full of praise for the Portlaoise man’s expertise of the game.

“Alan joins after previously coaching with Western Force academy and at Leinster. Through our new coaching appointments, we have added more skills and expertise to the team to drive our on-field performance and that started five and a half weeks ago when we returned to pre-season,” said Jackman.

Former Dragons’ attack and kicking coach Barry Maddocks will step up to the role of backs coach in the upcoming season.