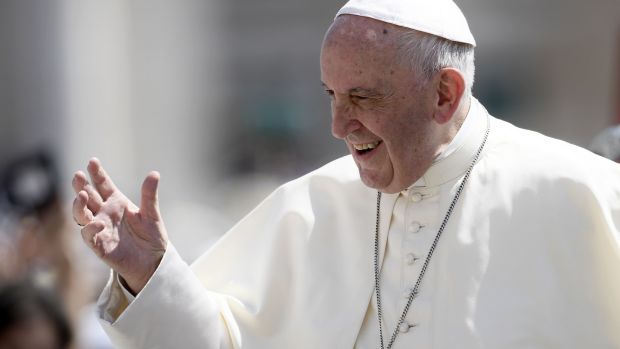 As a guest on LaoisToday’s latest Unlaois’d podcast, Father Paddy Byrne spoke about his hopes that Pope Francis would address victims of abuse and homelessness during his upcoming Papal visit to Ireland.

“I would hope that Pope Francis will make a very bold gesture to the victims of abuse, particularly here in Ireland, and many of them are coming to the fore, and rightly so at the moment,” said Father Paddy.

“I’m very mindful of the context of Church at the moment. It seems to be non-stop, and rightly so, in terms of scandal belonging to the past and in the United States this week,” the Portlaoise priest added.

Toxicity around the Church

He also highlighted how he felt that there are two seperate Catholic Churches in Ireland – the local community on the ground and then a toxic branch of the Church.

“On the ground, I always say there’s two Churches in Ireland. There’s the local Church here in Laois and Portlaoise, where I’m so happy to be a part of, and then there’s this ‘Church’ that often is perceived, and often rightly so – as a fairly negative, almost toxic brand.

“I was taken aback this week where Allianz – in respect to Allianz – but they do a lot of business with the Church, they’re our insurers. Every parish pays them tens of thousands of Euro every year, from our schools, from our Church buildings and from our personal insurance.

“They were the first to come out and say, ‘No way are we sponsoring the World Meeting of Families or the Pope coming to Ireland.’ This is because there is a toxicity perceived to the Church at the moment,” the Carlow native added.

However Father Paddy believes that there is hope for those within the Catholic faith, despite the abuses of the past.

He said: “In Portlaoise parish we have over 6,500 people who decide to come into the Church physically every week. At the last Census, despite everything that has happened historically, 79 percent of people ticked the box that they belong to the Catholic tradition, or at least identify to that.

“I think that will be exemplified when it comes to the Sunday of the Papal Mass. It’s the biggest event in Europe this year, and again I want to shy away from the big numbers. For me personally, I think it’s a moment when healing hopefully can take place, where people will come together with enthusiasm and I think it’s a moment where we really must try and hope for a new beginning within the Church.”

While acknowledging that the Papal visit is the largest event to take place in Europe this year, Father Paddy says he isn’t concerned with the numbers attending, but rather the issues that Pope Francis could address.

“I’m particularly enthused – not about the big numbers in the Phoenix Park – but I think he will highlight these injustices for those who have not, in the context of the avalanche of homelessness that is happening in this country.

“I warmly welcome the fact that he will visit a real hero of mine, Brother Kevin, and the homeless shelter in Dublin,” Father Paddy added.

Overall, the Portlaoise priest says that he is delighted to have Pope Francis, as he admires the vision the Pope has for the Church.

“Pope Francis to me is a very inspirational person, he’s pointing us in the direction of what the Gospel is essentially about. He is a man known for his gestures,” he concluded.

Father Paddy will be doing a live commentary on the Papal Mass in the Phoenix Park with Joe Duffy on Sunday, August 26.