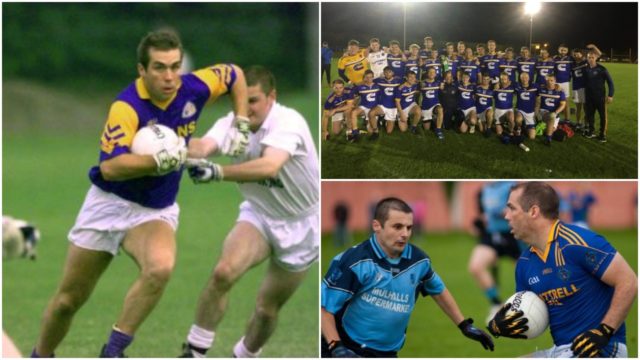 As well putting in many shifts as a player for 20+ years, Colin’s father Robert and four uncles (Chris, John, Pat and Richard) all togged out for Annanough when they last won a championship final – the intermediate in 1978 – and another uncle, Jim, captained the club when they reached the senior final in 1982.

Now as manager of a newly-emerging Annanough team, Miller hopes his side can bridge the 40-year gap this weekend when they take on O’Dempsey’s in the Laois junior football final.

“A win this weekend would be massive for Annanough. There’s a nice bit of excitement around the place.

“It would be brilliant to see the players get rewarded for their hard work.”

Colin knows how hard county finals are to come by, and isn’t taking anything for granted. He was one of the key men as Annanough reached and lost four intermediate county finals in 2000, 2001, 2006 and 2015, and is well aware of the challenge  O’Dempsey’s present this weekend.

“They beat us earlier on in the year in the league and there’s a good push in O’Dempsey’s, especially with their team still being in the senior competition.”

Annanough are also hoping to rebuild after being relegated from intermediate to junior by Barrowhouse just over 12 months ago. However Colin does believe that a few factors have helped his Annanough side this championship season.

The emergence of young players such as Damien McCaul, Killian Horgan, Ronan Stapleton and Elliot Scully and Johnny Fennelly among others, is a huge bonus to Annanough.

“We struggled for numbers not only last year, but for a few years. Young players like Damien, Killian, Ronan, Fergal [Scully] and Elliott have made a massive contribution. There’s now numbers and competition for places,” said Colin.

The Annanough man also said that being a part of the Clonaslee Gaels setup this year helped his side.

“I think that was a positive thing. Players got experience playing in the senior championship and training at a higher level.”

He also valued previous championship matches against Graiguecullen, Camross and Park-Ratheniska for building his team on from the league, and says that he hopes the team’s hard-work throughout the championship will show in the final.

Annanough take on O’Dempseys in the JFC Final in O’Moore Park at 5.30pm.