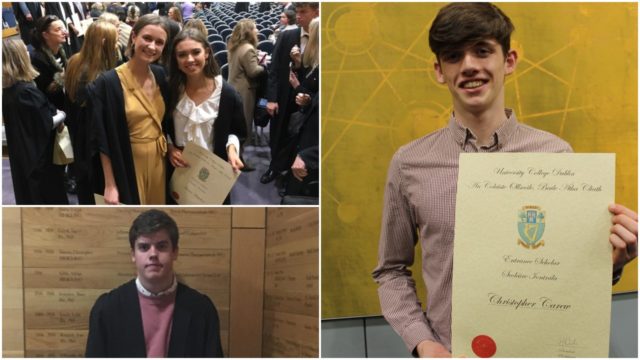 Last week, we brought you the news that three young girls from Stradbally had received awards from University College Dublin for their outstanding Leaving Cert results.

And now we bring you more good news as we have learned that six more Laois pupils also received awards from the Dublin college.

UCD Entrance Scholar awards are presented to first year students who achieve 560 points or more in their Leaving Cert in recognition of their academic accomplishment to date.

Recipients of these awards are presented with a recognition certificate at a ceremony in November each year and their achievements are recorded on their academic transcript.

Crettyard native Aine Burke attended St Leo’s in Carlow while so too did Treasa Hayden who comes from Mageny.

Conor is now studying Law and History in a four year course in Dublin. The Portlaoise teen chose this route after History being one of his favourite subjects in the Leaving Cert.

Karina is the third winner from Scoil Chriost Ri – an incredible feat for the Portlaoise school.

There was one other awardee with a Laois connection – former Knockbeg student Martin Moloney.

The Irish rugby under-20 star, who is from Kildare, was joined by principal Mike Carew on the night.

Fair play to all ten of them and best of luck to them for the duration of their courses!