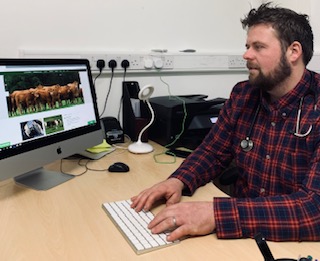 Growing up on his family’s suckler-to-beef farm instilled in Michael Cushen a love of all aspects of farming and he realised at a young age that he wanted to embark on an agriculture related career.

After attending Heywood Community School, he made the move to Dublin where he met his wife Joanne who was also studying Veterinary Medicine in UCD.

Graduating in 2012 he began his career in mixed practice, spending four years developing his skills in New Ross. His time there taught him that he had a keen interest in Large Animal Medicine and Surgery and in Autumn 2016 he returned home to start his own Farm Animal practice while also working with his father, Michael Snr, on the family farm.

He currently covers a 20-mile radius from his base in Stradbally, stretching from Portarlington to Crettyard, Mountrath to Monasterevin, Ballinakill to Ballybrittas and everywhere in between.

The business has been growing rapidly with the addition of two office staff and another full-time vet to ensure a progressive and efficient 24-hour service for his clients.

He plans to continue to grow his client base with the addition of another full-time vet in the near future.

You can get in touch with Michael Cushen Farm Animal Veterinary Practice on 087 2459437.