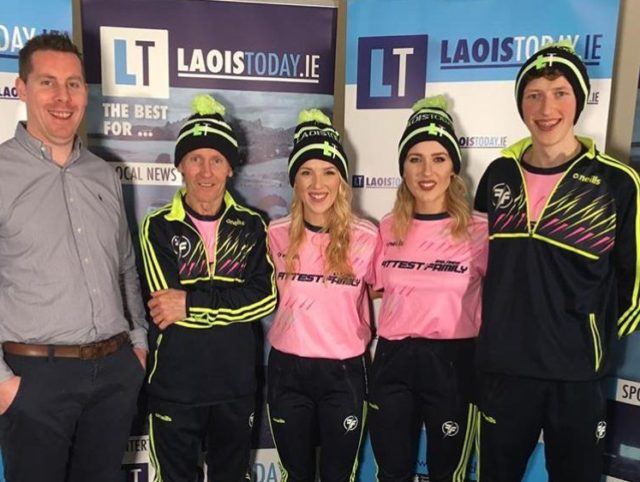 After amazing displays of determination and tenacity on tonight’s show, the McDonald family from Ballyroan are now through to the final of the hugely popular Ireland’s Fittest Family.

They are also the only team with two female members through to the final.

This week, Davy Fitzgerald’s McDonald family went up against the Lallys of Dublin and in Finnegan-Hogans from Cork in ‘Hell and Back’.

Two people from each family went head to head in ‘Swamp Trek’, then the Devil’s Mud Run pushed the families even further.

In ‘Swamp Trek’ two members of each family needed to dash to the cliffhanger walls, then trek through 100 metres of bog under a net, next it’s a 110 metres dash to a slide into the water to swim to the platform.

Sixty-two year old Martin and son Cian were selected from the McDonald family and what competitors they were.

Martin and Cian gave a terrific and heartwarming display. They lead from the start – and when things got tough in the water, with Martin not being able to swim – his son Cian helped him along the way.

They finished first in the ‘Swamp Trek’.

In the next challenge, the time trail, all four family members competed. They climbed up cargo nets, over monkey bars, balanced on beams, waded through the bog and carried a log to the finish line.

They came second to come on top of the leader board and go through to the final.

At the beginning of the competition, Wexford hurling manager Davy Fitzgerald picked the McDonalds as one of his three familes to mentor. along with the Lipinskis from Tipperary and the Pierse family from Kerry.

The three families under the Wexford hurling manager’s guidance went up against each other for a place in the quarter-finals.

The McDonalds saw off the Lipinskis for a coveted quarter-final place.

Dublin Port hosted the quarter-finals which saw the McDonalds go up against the Coneys from Tyrone, the Lallys from Dublin, and the Sinnotts from Wexford.

There, Martin – recorded the then all-time highest score in the ‘Hanging Tough’ challenge – where he used his upper body strength to hold onto a bar six metres, or 20 feet, above the Irish Sea for an incredible 5.50 minutes.

They finished second in the quarter-finals which earned them their semi-final place tonight.

The McDonalds are well known in athletics circles in Laois. Dad Martin is in his 60s and is an international mountain runner and farmer.

All three of his children are heavily involved in the sport too with Breda, who is a teacher in Heywood, and Kate, competing regularly for Ballyroan, Abbeyleix and District AC.

Cian is the youngest member of the team and is in secondary school in Heywood CS.

He has represented Ireland at international level mountain running.

The McDonalds will be hoping to follow in the footsteps of, or maybe even go one better than, the Mulhare family who competed in this a few years ago.

The Mulhare family from Portlaoise appeared in the second series of the competition.

Coached by former Olympian Derval O’Rourke, the international long distance runners also made it as far as the final and were pipped at the finish line by the Kingstons of Cork.

SEE ALSO – Moment in Time: Christmas lights being switched on over the years and across the county

WATCH: TV Producer who made shows about Laois grapples with Coronavirus