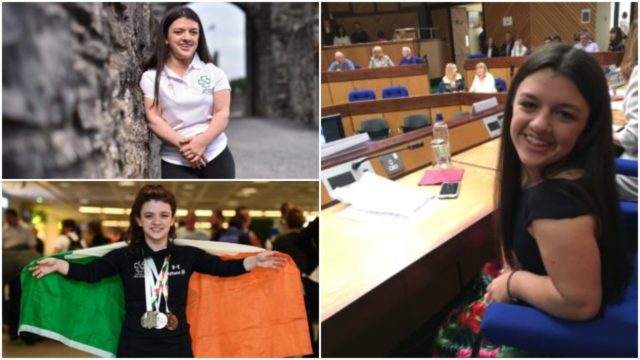 A Laois teenager has been nominated for the RTÉ Young Sportsperson of the Year award.

Paralympic athlete and Portarlington teenager Nicole Turner was one of just 13 nominated for the illustrious honour.

Nicole is certainly well-worthy of her place on the list, and earned a silver medal in the European Para Swimming Championships in Dublin last August.

Adding to that, the young Portarlington swimmer also represented Ireland in the 2016 Paralympic Games in Rio de Janeiro. Aged only 14 at the time, she qualified for an amazing five finals in Brazil.

In May 2017, she received a civic reception in Laois County Council for her glowing contribution to paralympic and Laois swimming.

Two more Laois athletes, world champion boxer TJ Doheny from Portlaoise and swimmer Shane Ryan from Portarlington were on the longlist for Sportsperson of the Year, but didn’t get selected for the shortlisted 13.

Among the 12 other nominees for Young Sportsperson of the Year include All-Ireland winner and All Stars Young Hurler of the Year Kyle Hayes and double gold U-18 European athletics winner Sarah Healy.

The winner of RTÉ Team of the Year will be decided by a public vote during the awards ceremony, which will take place this Saturday at 9.20pm on RTÉ One.

Meanwhile, the winner of Young Sportsperson will be chosen by senior members of RTÉ Sport.

Nicole’s mam Bernie told LaoisToday that the whole family are so excited for Saturday night and they will be in attendance at the awards.

13 Nominees for RTÉ Young Sportsperson of the Year: