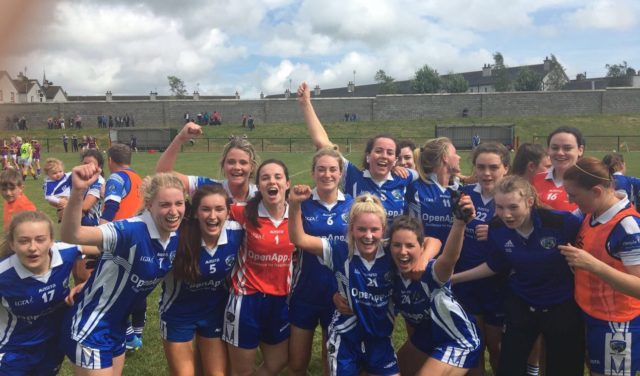 It was an incredible year for the Laois Ladies.

Unfortunately it ended in heartbreak at the All-Ireland Intermediate Ladies Football quarter-final in Moate back in August.

All the same, they gave us some great days out including this one.

Brought to you in association with Hughes Pharmacy Portlaoise

The Laois Ladies have a Leinster final to look forward to after Kevin Doogue’s side produced a stunning second half comeback to see off Wexford in Enniscorthy this afternoon.

Laois looked in real trouble twenty minutes from the finish as they trailed by six points but they showed remarkable composure to battle back and win.

There were heroic performances all over the field. Fiona Kelly made a string of fine saves in goal while Emma Lawlor and Eva Galvin came up with the all important goals.

Laois played against the breeze in the first half and really struggled early on.

The hosts got the first three points of the game via Catriona Murray, Ellen O’Brien and Aoife Shiel.

Emma Lawlor replied for Laois after five minutes but Wexford went and scored the next four points to go six clear.

Fiona Rochford, Aoife Shiel and a brace from the impressive Catriona Murray moved them well ahead.

Things could have been even worse for Laois in that period but for the heroics of keeper Fiona Kelly in goal who pulled off two incredible saves from point blank range.

Clare Conlon raised Laois’s second white flag of the game from a free at the midpoint of the half and the scoring slowed down a bit after that.

Laois didn’t register one in the next ten minutes while Catriona Murray just added one more free for Wexford.

Erone Fitzpatrick cut the deficit to five as we entered the closing stages of the half and while Catriona Murray hit back with her fifth point, the final act of the half saw Emma Lawlor score to leave it 0-9 to 0-4 to Wexford at the break.

Laois needed a good start to the second half and they got it when substitute Eva Galvin, who was introduced at half time, rattled the net with basically her first touch.

Emma Lawlor then added a point and all of a sudden Wexford’s lead was down to a point.

However, Wexford’s response was emphatic. Fiona Kelly had made a third great save in between Laois’s opening second half scores but there was nothing she could do about Bernie Breen’s effort which sailed over her head and into the net.

Clare Conlon responded for Laois but that was quickly cancelled out by Kellie Kearney for Wexford.

Laois then almost had a second goal as we entered the final quarter of the game. Laura Nerney’s shot looked destined for the net but just skimmed the crossbar and went over it.

Wexford began to drop numbers back behind the ball in a bid to protect their kead but Laois kept attacking and were rewarded ten minutes from the end with their second goal.

Laura Nerney went on a surging run and found Emma Lawlor in space and she rattled the net to leave just two points between the teams.

And the margin was down to the minimum after 52 minutes when Erone Fitzpatrick turned over the ball in the Wexford half and planted it between the posts.

And the sides were level for the first time three minutes later when Laura Nerney converted his second point of the game from close range.

Wexford refused to go away though and Catriona Murray swung over a late free to make Laois sweat.

But Kevin Doogue’s side hung on and celebrated at the full time whistle.

They will now face Wicklow in the final after they comfortably defeated Longford by 3-12 to 0-4 in the other semi final.

That game will take place on July 1 in Dr Cullen Park.