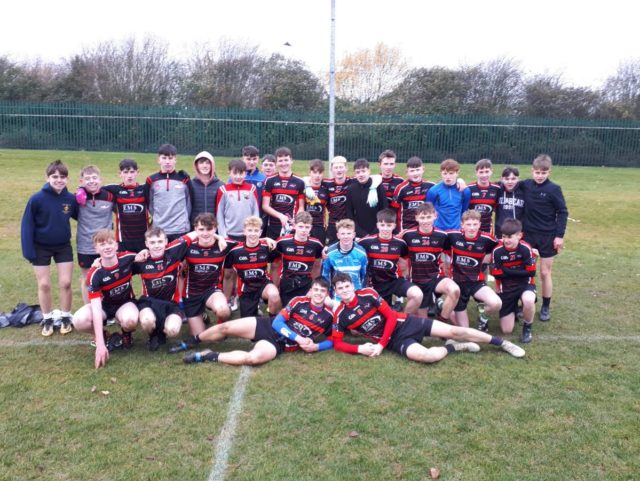 Portlaoise CBS qualified for the semi-finals of the U-16 ‘C’ South-Leinster championship following a 13 point win over Dunlavin of Wicklow this afternoon.

The victory for the side, managed by Paul Cahillane and Geoff Brennan, sees them set up a mouth-watering semi final against fellow Laois school Heywood next week.

The margin was probably a little bit harsh on Dunlavin who made things very difficult at times for the CBS.

But the Laois side had too much quality in their full forward line with Emo’s Paddy Hosey and Portlaoise’s DJ White scoring 2-12 between them over the hour.

The CBS began the game well with points from Cormac Dunne and Hosey but they were rocked after ten minutes when Declan Grace powered his way through to beat Conor Brown with virtually Dunlavin’s first attack.

Paddy Hosey levelled things up and following some neat handpassing by Daire McDonald and DJ White, Hosey got through to score Portlaoise’s first goal of the game.

Dunlavin kicked three more points in the first half but the CBS extended their lead with scores from Hosey, White, McDonald and wing back Ben Dempsey to leave them ahead 1-8 to 1-3 at half time.

A brace of DJ White frees along with a first of the afternoon for James Connolly saw Portlaoise edge further clear on the resumption of play but Dunlavin refused to give up as a goal and then a free from the Wicklow side left four between them as we approached the midpoint of the half.

However, Portlaoise scored two goals in three minutes to kill off the tie. The first came from some great play by Kevin Swayne and Josh Hogan which resulted in Ben Dempsey finding the corner while the second was a delicate chip by the excellent Paddy Hosey.

Dunlavin did keep going and got two goals before the end but the CBS were never in danger as points from White, Hosey and Josh Hogan saw them win in some style.