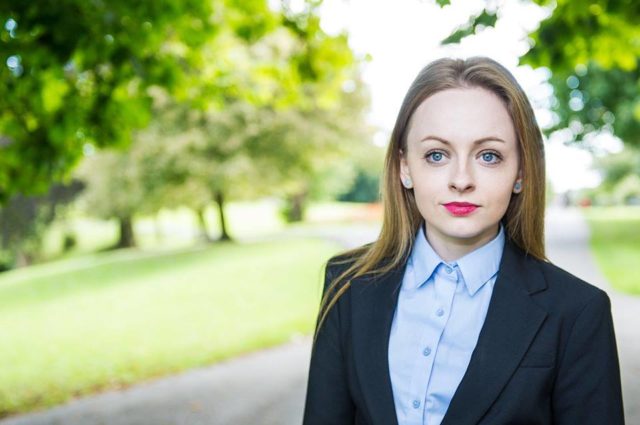 Earlier this week the news broke that new candidate Conor Bergin was among nominees for the upcoming Fine Gael Local Election convention in Borris-In-Ossory/Mountmellick.

He is a young fresh face at just 25-years-of-age and now it is confirmed that another young person will contest the nomination in the Graiguecullen/Portarlington area.

Stradbally woman Vivienne Phelan has been rising through the ranks of Fine Gael and has put herself forward for nomination in her local municipal area.

Vivienne, who studied Veterinary in UCD, has served on the National Executive of Young Fine Gael as the Director of Organisational Development, Women’s Engagement and Recruitment.

She was also a member of the National Executive at senior party level and has been prominent at the two recent Fine Gael General Election Selection Conventions when she proposed Charlie Flanagan on both occasions.

Indeed the party is well served by young women in Laois with 2016 General Election candidate Thomasina Connell also stating her intention to seek a nomination to run for a seat in the Portlaoise District in this year’s Local Elections.

However Vivienne believes that more women’s voices should be heard at council level.

“I don’t believe there is enough female engagement. There are six male councillors in this area (Graiguecullen-Portarlington) and sometimes voices can be missing on issues like children’s playgrounds, is there single mothers being represented, for example.”

Women in politics is a particular area that the 25 year old Stradbally woman is interested in, and she even earned the opportunity to lobby at Capitol Hill, Washington on these issues.

Vivienne’s family runs the well-established ‘Grandstand’ newsagents in Stradbally, more commonly known as Sylvester’s – who is her dad.

She also represented Laois in Macra Na Feirme’s Queen of the Land this year.

Vivienne is likely to go forward at the convention alongside sitting Councillor Tom Mulhall and another nominee not yet decided.

The Fine Gael selection convention for the Graiguecullen-Portarlington Municipal District is scheduled for next Friday, January 18, in the Gandon Inn.

Cllr Mulhall previously confirmed to LaoisToday that he will seek re-election while the second sitting councillor in the area, John Moran, is to retire.

LaoisToday understands that a nominee to replace Cllr Moran will be selected ahead of next Friday’s convention.

Fine Gael ran three candidates in that area in the 2014 Local Elections with James Daly losing his seat. The re-configured areas – Luggacurren and Emo, previously two four-seaters, were merged to make Graiguecullen-Portarlington a six-seater.

It meant that Fine Gael’s representation went from four to two. Tom Mulhall and John Moran retained their seats but James Daly lost his and James Deegan retired.

This year’s Local Elections will be held on Friday, May 24.