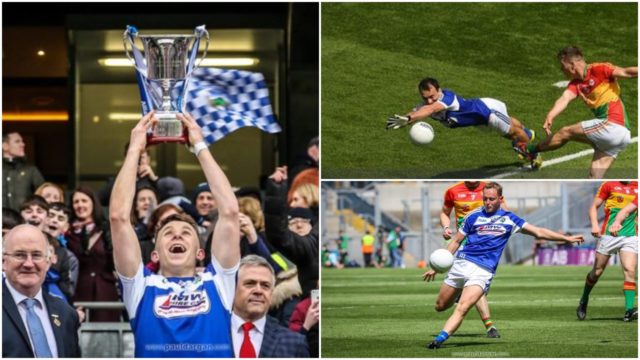 For the third year in a row, Killeshin defender Stephen Attride will be the Laois senior football captain.

Attride was first bestowed the honour in 2017 under manager Peter Creedon and when he departed at the end of that year, current boss John Sugrue stuck with the Knockbeg College teacher.

It was a decision that paid dividends as Laois enjoyed their best season in a number of years.

Attride became the first Laois captain since Ian Fitzgerald to climb the steps of the Hogan Stand to collect a trophy last March as Laois won Division 4 of the National League by defeating Carlow.

Victories over Wexford and Westmeath followed in the Leinster championship before Attride’s inter-county season came to a sad end in the dying embers of the semi final win over Carlow.

He showed incredible bravery to dive on a loose ball and suffered an horrific head injury in the process.

He missed the Leinster final defeat to Dublin and the All-Ireland Round 4 Qualifier loss to Monaghan but did recover in time to play for his club Killeshin who reached the quarter final of the club championship where they lost to neighbours Graiguecullen after a replay.

Last year he was assisted by John O’Loughlin and Graham Brody but there is a change here as Timahoe’s Damien O’Connor and Portlaoise’s Gareth Dillon will now assume the role of vice-captains.

Laois began the new season with O’Byrne Cup defeats to Meath and Wexford but they ended that competition with an away win over Wicklow.

Laois begin their Division 3 campaign away to Down in Newry on Saturday January 26.