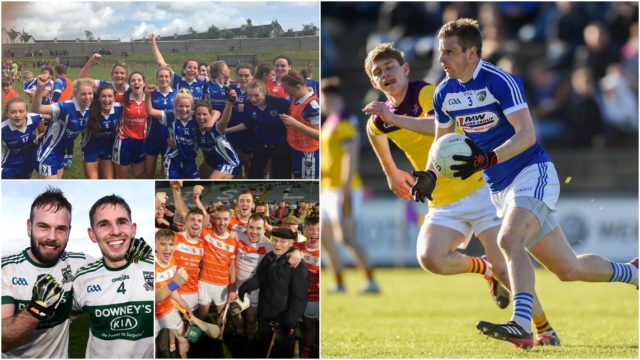 We had plenty of entertaining games throughout the 2018 season in football, hurling, camogie and ladies football.

With the 2018 season officially coming to a close as reigning champions Portarlington took the U-21 football crown again last weekend, we took a look back at what we’ve selected as the Top 15 games of the years.

Certain teams bring out the best in each other and put on a fine display. Although it was tough, we narrowed it down to 15 games – with most of these having the ideal combination of excitement, drama, quality and a tight finish.

It was neck and neck throughout the game with fine scores from Camross’ Zane Keenan, Mark Dowling, Ciaran Collier and a stunning 12 points from Rathdowney-Errill’s Mark Kavanagh.

It wasn’t a vintage championship overall and while the drama from the Ross King saga dominated afterwards, it was still a highly competitive decider.  You can read the full match report here. 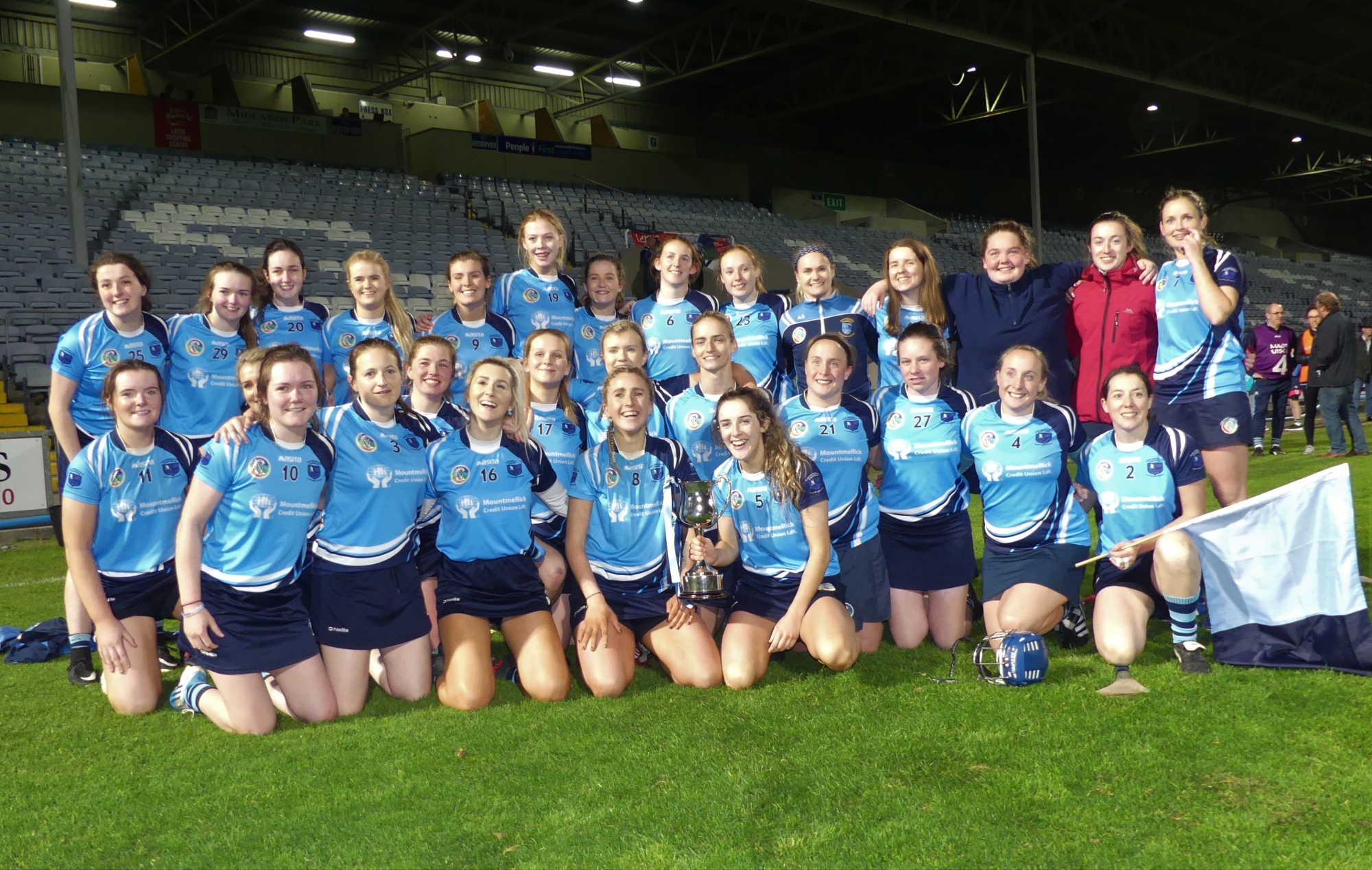 O’Moore’s were on a winning streak this season and dethroned reigning county camogie champions Camross in a thrilling county final.

All eyes were on Mary Keating as she scored an impressive 1-7 and led her side to the title having fought back from trailing early in the game.

Her goal came with less than five minutes to play and although Camross kept battling, Keating and Laura Peake had all the right answers to take the title. The full match report can be read here. 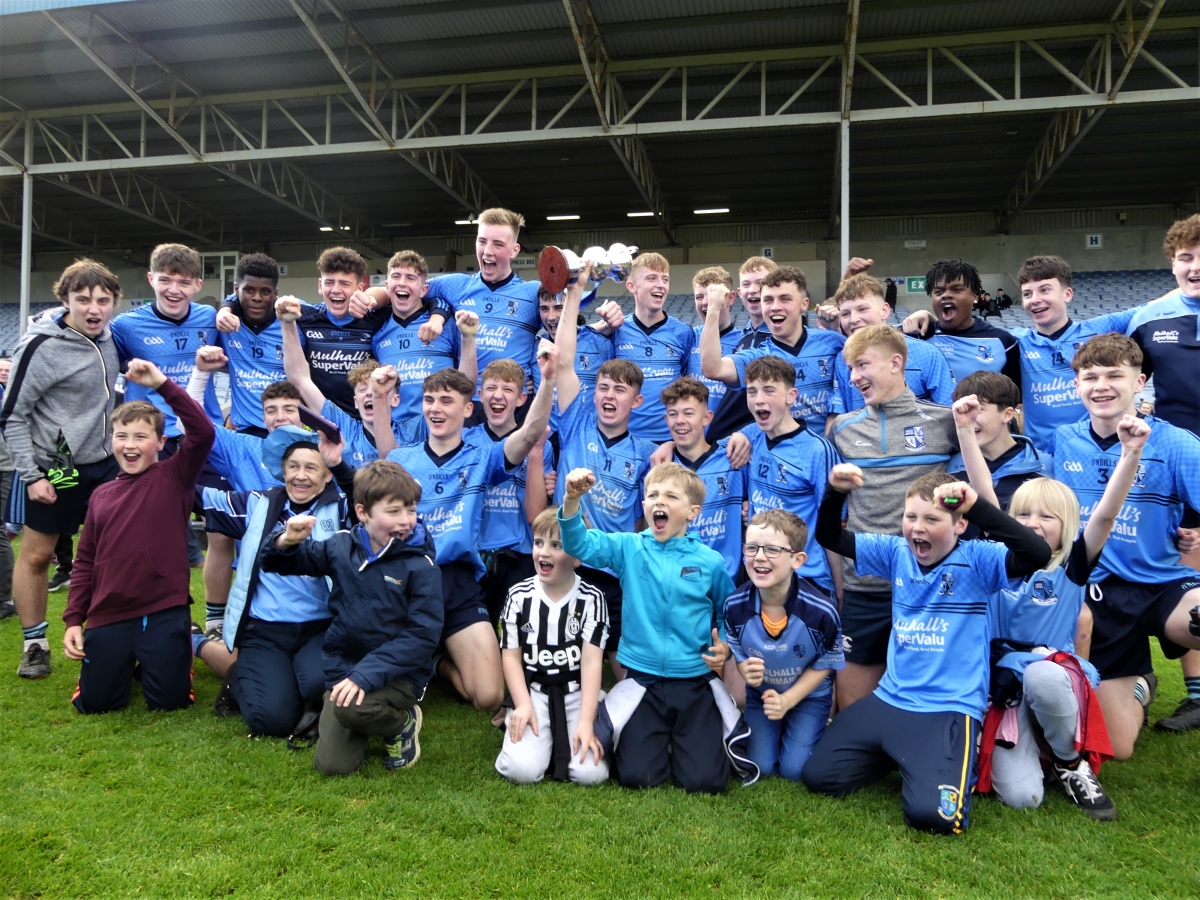 Ballyroan-Abbey and Portarlington were forced to replay the minor county final after a cracker of a game in O’Moore Park which saw Ballyroan play with one man down for 40 minutes of the game.

The introduction of Davin McEvoy for Ballyroan-Abbey was a major change in the game as he scored 1-3 in the second half.

Ballyroan led by five points late on before Portarlington’s Ciaran Ward converted his second penalty. Minutes later with a three-point gap between the sides, Sean Michael Corcoran broke the ball down to sub Ceilum Coughlan Maher who drilled the ball to the net and confirmed the replay.

However, Ballyroan-Abbey emerged as county champions in the end with a comfortable win seven days later.  Full report here.

Graiguecullen and Killeshin put on quite a show in the championship quarter final back in August which resulted in yet another draw in this incredible game of football.

It had everything you could think of in a championship games from penalties, goals, red cards, black cards and a dramatic finish. Graiguecullen trailed by five points with eight minutes to go, but they came back from the dead after Killeshin had controlled the game.

Aaron Forbes kick-started the comeback with a late goal and Jamie Parr brought it back to one. Goalkeeper Danny Bolger nailed the last kick of the game slotting over a 45 to level the game and send it to a replay. You can read the full report here.

Arles-Kilcruise rescued a draw in what was a controversial yet thrilling game which saw incredible drama between Marty Scully and David Conway.

Conway left the field with an eye injury in the 12th minute and Scully went on to play a stormer for Ballyroan. Following a Scott Conroy equalizer with minutes to go, Francis Egan and Ross Munnelly pushed on with scores for Kilcruise.

Ballyroan regained the lead through MJ Tierney but Munnelly grabbed the equaliser after a pass from Conway, now back on the field after returning from Portlaoise hospital.

The sides played out another entertaining game in the replay but it was Ballyroan-Abbey who advanced.

You can read the full report of the drawn game here.

The first U-19 Laois hurling final was a thriller as The Harps narrowly beat Camross in November after a hard fought battle which went to extra time.

Ciarán Comerford put on a fine display scoring 12 points including the two late scores which secured The Harps’ win. Having trailed by two points at half time, Robbie Delaney and Oisín Bennett put Camross back in the lead in the second half.

The Harps had to wait until the 52nd minute for their first score of the second half but Fionn Whelan and Ciaran Comerford pointed to put them back in the lead before late Eoin Gaughan frees forced extra time.

The sides were still level at half time of extra time but Comerford got two late points to eventually seal the win. You can read the full report here.

A game that had everything! It might have been a Division 3 league final (and technically the fourth tier of Laois club football) but you’ll do well to see a more entertaining game of football this year.

In the end The Heath’s second team got the better of Portarlington’s second team in a clash that saw The Heath recover from a disastrous start where they were nine points down after 15 minutes and still six down with 20 minutes to go.

There was a selection of yellow cards, a black card for each team late on and it was a mystery how there wasn’t at least one red. A hard-hitting game on a concrete-like surface then erupted into an all-in melee in injury time after a couple of wild Heath tackles halted Port’s search for an equalising goal.

Cathal Whelan was the star of the show for The Heath with 10 points. You can read the full report here.

The Harps needed two periods of extra time before they finally got the better of Clough-Ballacolla in a thrilling U-21 semi-final in December.

While the conditions were difficult, the sides played out a high quality affair and a brilliant Lee Cleere point tied the game after 60 minutes.

It was The Harps that had to come back to level the game in the first spell of extra time before they eventually did enough to get over the line. They later lost the final to Camross.  See full report here. 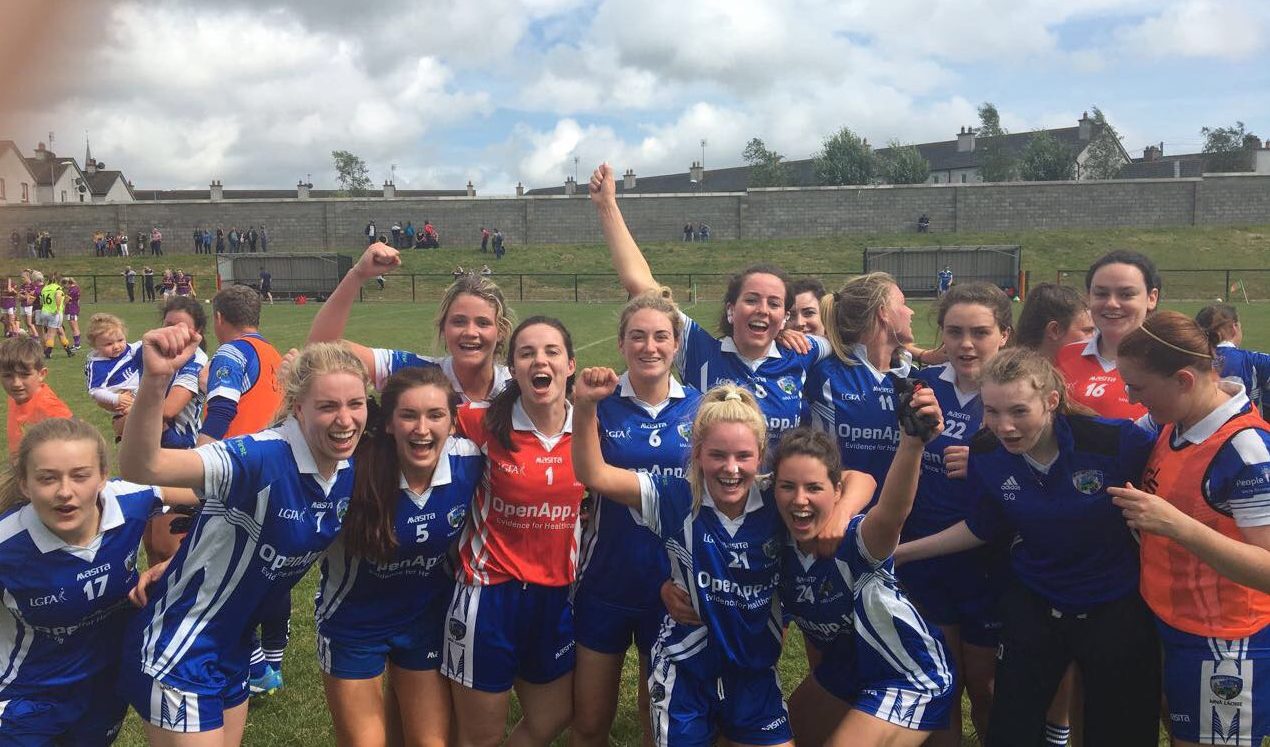 The Laois ladies football team pulled off the most remarkable of second-half comebacks in June against Wexford in the Leinster semi final.

There were inspiring performances all over the field as Laois came back from six points down early in the second half to record a thrilling one-point win.

Laura Nerney found Emma Lawlor late in the second half where Lawlor rattled the Wexford net. The heroics of Erone Fitzpatrick and Nerney leveled the game while Emma Lawlor and Clare Conlon pointed in the last few minutes to see their side into the Leinster final. You can read the report here. 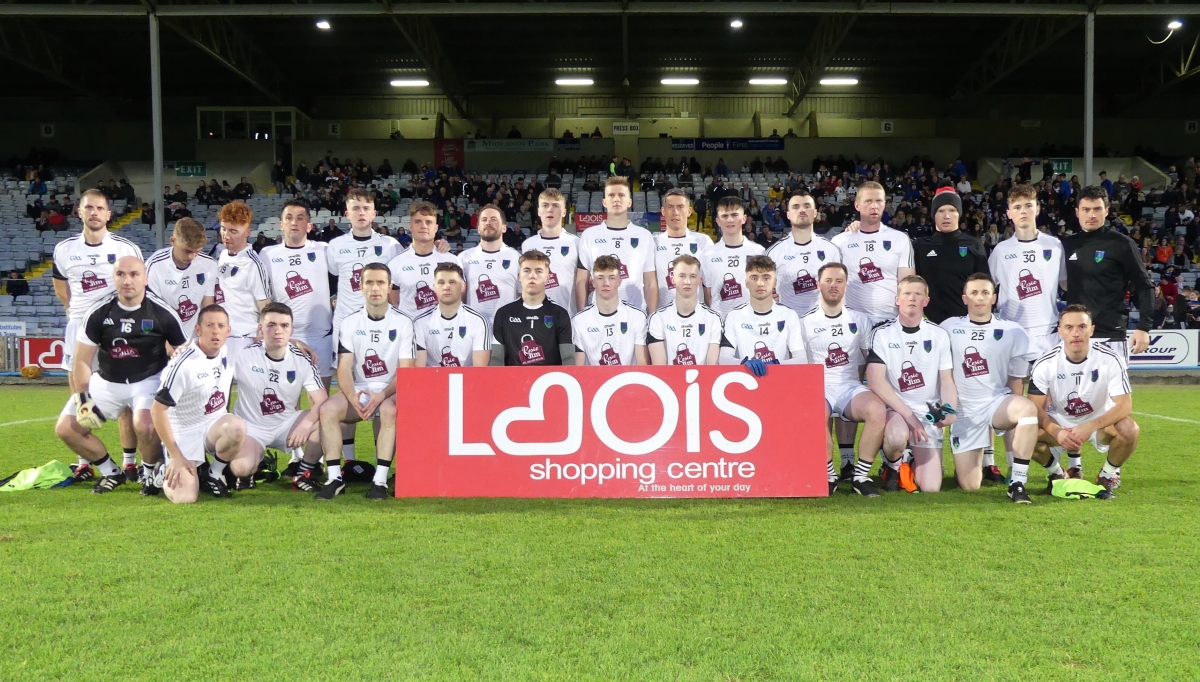 The 31-year wait came to an end in Courtwood as they were crowned Intermediate football champions after a final win over Mountmellick Gaels in a high quality contest.

Sean O’Flynn, Niall Dunne, Cian Doyle, Matthew Byron, Alan Kinsella and Rory Doyle were just some of the men of the moment, all putting in terrific performances for Courtwood.

Mountmellick were 0-12 to 1-7 down heading into the final quarter and despite efforts from James Mullaney and Jason Caffrey in the late stages, Courtwood had the edge with Alan Kinsella scoring the insurance point. You can read the full report here. 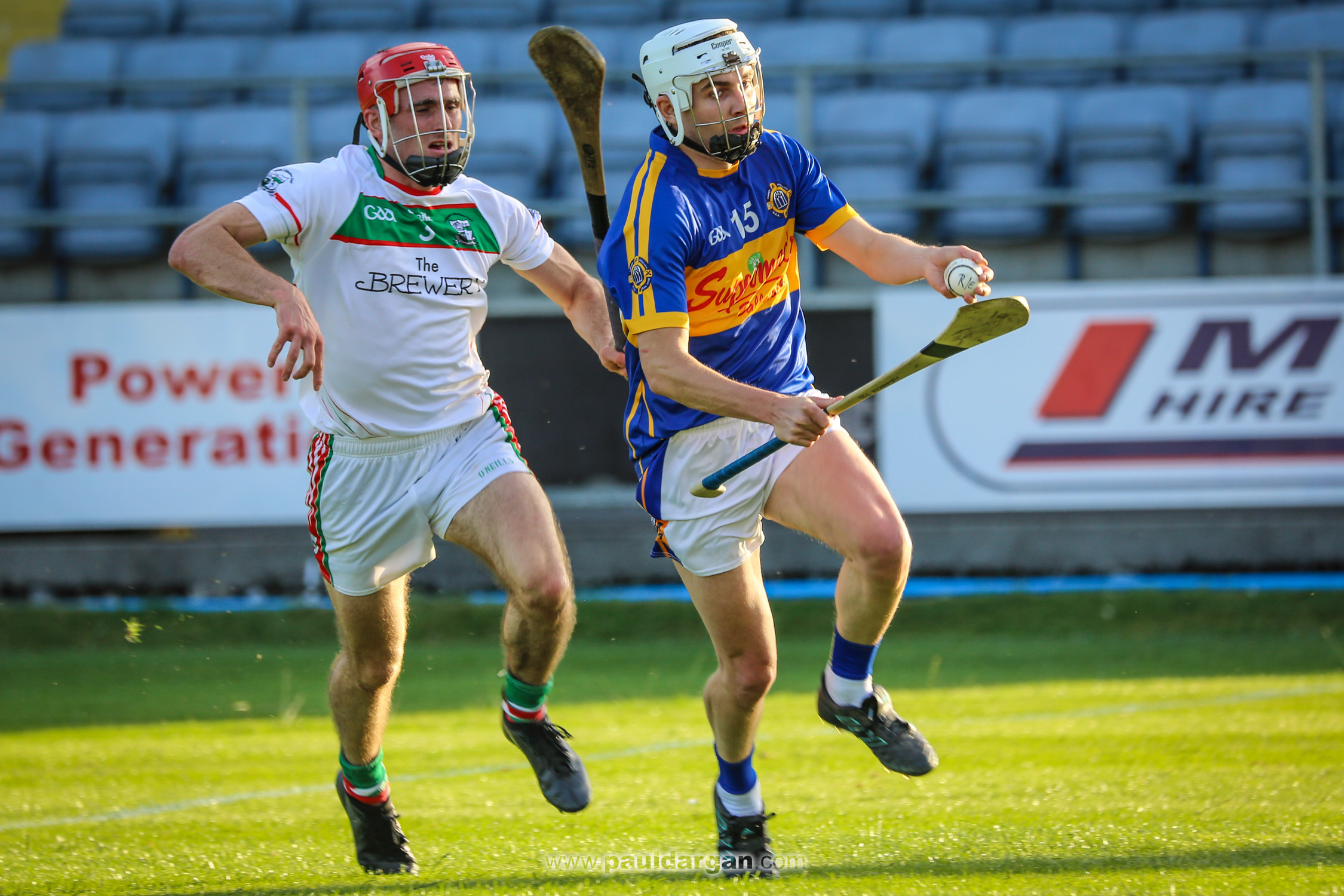 The best game of the 2018 Laois SHC was actually the first game as these sides gave spectators a mouth-watering championship opener which ended with Willie Hyland firing over the equalizing free three minutes into injury time.

With 10 minutes to go it looked as though Clough Ballacolla would be winners but instead, Rathdowney-Errill’s Paddy Purcell and Paddy McCane struck for late goals.

Tadhg Dowling’s third point of the game couldn’t have come at a better time for Rathdowney-Errill but Hyland responded with the equalizer with the last puck of the game.

What a way to start the championship. You can read the full report here.

Portlaoise marched into the Leinster semi-final after dethroning last years Leinster champions, Moorfield in a spectacular game in Newbridge.

Paul Cahillane and Ciarán McEvoy were on fire for Portlaoise and stood up at vital times of the game while Graham Brody pulled off some excellent saves. Portlaoise showed all their class throughout the game by responding well to every obstacle put in place by Moorfield.

Cahillane and Craig Rogers came up top scorers while Bruno McCormack, Gareth Dillon, Ricky Maher and Kieran Lillis added to those all important scores to see them through the Leinster semi-final. Read the full report here. 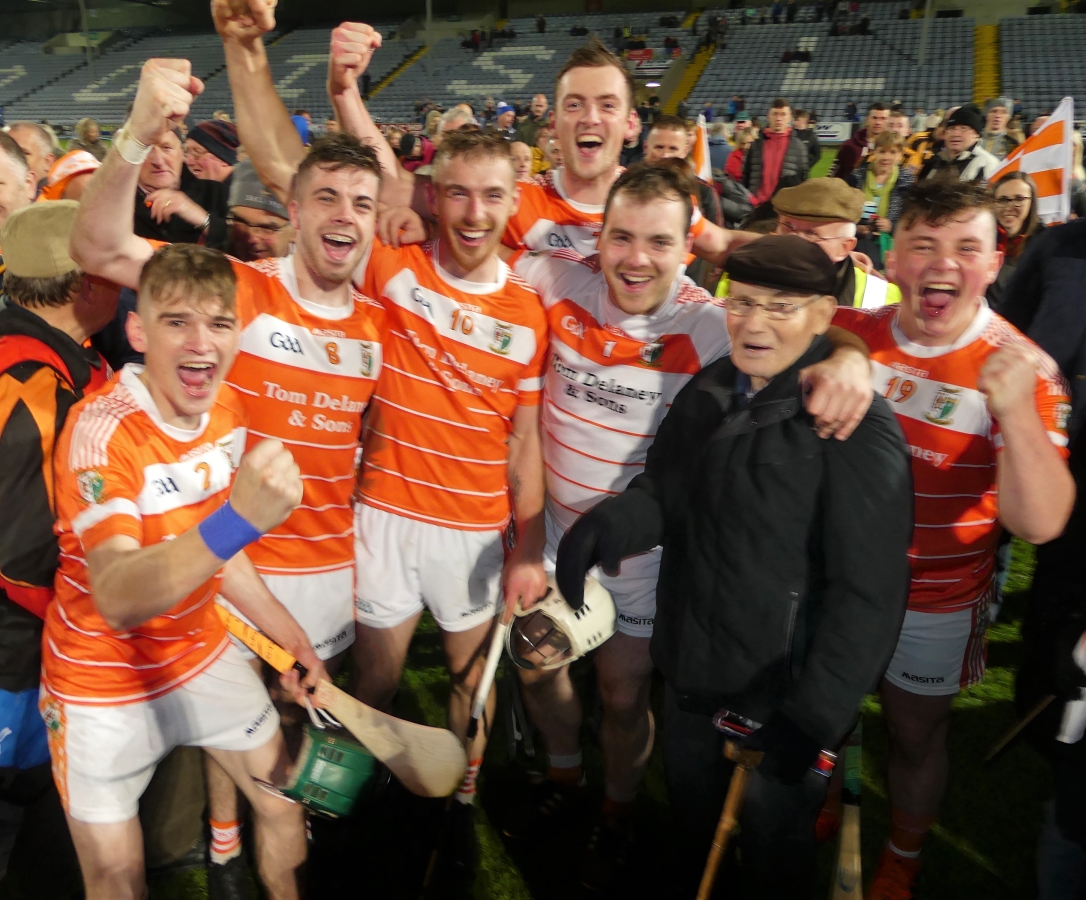 It was a spectacular final as these rivals battled it out for the Intermediate title as it looked as though Camross were to be the winners but relentless hard work from John Lowry, Ciaran Conroy and Gavin Conroy – to name a few – turned a three-point deficit into a six-point win.

Ben and Ciaran Conroy helped Slieve Bloom to take the lead for the firs time in the second half scoring 1-3 between them before David Mortimer struck back with a free.

Ben Conroy wasn’t allowing a Camross comeback as he plucked the ball from the clouds and places it in the foot of the net before a free from Ciaran left 6 points between them at the final whistle. You can read the full report here.

Portlaoise were a pleasure to watch throughout the 2018 season in both the county and Leinster championship but the curtain finally came down on their campaign in the Leinster semi-final against Kilmacud Crokes.

It was a game of pure and utter drama and had supporters biting their nails and covering their faces in angst. Portlaoise chased the game throughout but looked like they could force extra time when Scott Lawless was fouled inside the square.

A missed penalty opportunity from Craig Rogers to level the game with seconds to go, though, meant the end of the road for the Town men. Full report here.

This game was the catalyst for the summer of football that Laois fans enjoyed. The comeback of all comebacks. Laois came from 10 points down to snatch a six-point win.

Laois looked as thought there was no coming back from trailing bey so much at half time but Donie Kingston led the way while Colm Begley, Stephen Attride and Kieran Lillis excellent.

Laois took the lead for the first time in the second minute of the first half of extra time through Darren Strong. Lillis, Trevor Collins and Paul Kingston hit the last few scores to pull of a brilliant win.

Laois would later go on to beat Westmeath and Carlow to reach a first Leinster final in 11 years where they’d lose to Dublin and then bow out the championship in Round 4 of the All Ireland Qualifiers against Monaghan.