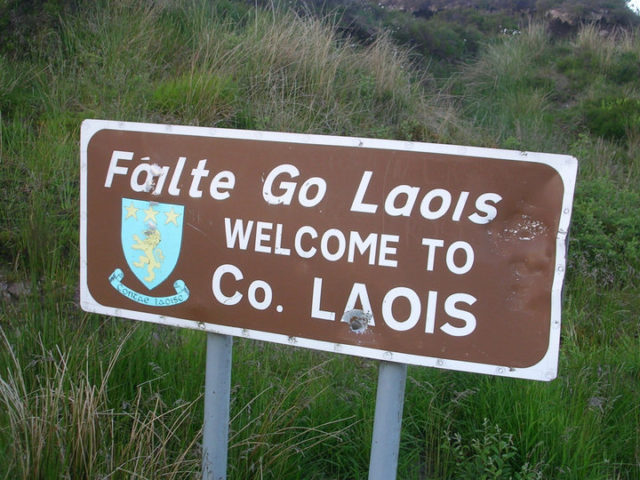 Usually, ‘Welcome to Carlow’ or indeed ‘Welcome to Anywhere’ signs would be viewed as a positive, a gesture of friendship. But not if such signs are on the wrong side of the Barrow bridge and planted in Laois.

Someone in Carlow has no respect for the county boundary which is a hard border, Brexit or no Brexit, judging by the livid response to the invasive signage from Cllr Ben Brennan.

The offending sign is now causing more consternation than the infamous ‘Three Billboards Outside Ebbing, Missouri’.

The Laois-Carlow rivalry on the GAA field is well known but now Cllr Brennan is marking their cards off the pitch as well, going so far as to threaten that he would personally remove the signs from Laois unless something was done.

‘Welcome to Carlow – A Great Place to Shop’ declares the out of order and out of place sign, Cllr Brennan told colleagues at this week’s Council meeting.

“Graiguecullen is not in Carlow. I have repeatedly asked for them to be taken down, or do we have to take them down ourselves?

“They are in Laois and they did not get planning permission. Graigue is in Laois, not Carlow, sort it out,” he insisted of the officials.

Cllr Padraig Fleming agreed that the sign should be located on the border at the bridge on the River Barrow.

When moments later Cllr Fleming was quick out of the traps and jumped the gun in his enthusiasm to propose the taking in charge of two estates, Springhill Court and Fruithill Manor, both in Graiguecullen, Cllr Brendan Phelan interjected to tease: “Ben you may get Padraig to move that sign, he’s very quick at getting things done.”

It wasn’t the first trace of pre-election nudging in the air throughout the meeting.

At the meeting the councillors agreed to a Material Contravention of the County Development Plan (2017-2023) to facilitate the change of use from an existing retail unit over two floors, originally Lifestyle, to a physiotherapy clinic at the Barrowvale Retail Park, Sleaty Road, Carlow, Co Laois.

The change of use of the unit was opposed by Carlow County Council, as it is not in accordance with the land use zoning objectives for this area as set out in the Joint Spatial Carlow-Graiguecullen Urban Area Plan, in which instance the stated zoning is ‘retail warehousing’.

However, the planners in Laois while noting the land-use objectives and the objection from Carlow County Council, recommended granting the change of use.

They took in to account that the unit on the application and the adjacent units are presently vacant and have been for some time.

They also observed that there are also a number of large vacant units at the entrance to the Barrowvale Retail Park.

“The current proposal would serve to take one of these unoccupied units out of vacancy and it would generate employed with associated spin-off benefits.

“This in turn would assist to improve the vitality and viability of Barrowvale Retail Park,” the planners conclude.

The proposed new clinic would be used for physiotherapy, pilates and rehab. The layout envisages 8 treatment rooms, a seminar room, a rehabilitation gym, a pilates room and a reformer room. It would open from 8am to 8pm daily.