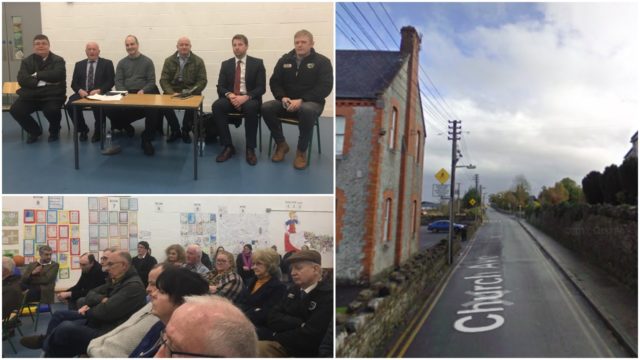 On top of the agenda was the potential for traffic congestion issues ahead of a development due to commence off Church Avenue which will see almost 80 houses constructed.

The development will see 72 houses and 150 car parking spaces constructed behind St Colman’s NS as well as two acres for a playing pitch for the primary school.

For this to happen, the meeting was told that a considerable movement of heavy vehicles will be traveling down Church Avenue during construction.

Chairman of the SCDA Donal O’Shea said it was not the development they are against – ‘just about how the traffic will move’.

Residents say that the 15 foot wide entrance to the avenue cannot take any more traffic.

Among those sitting at the top table were Cllrs Tom Mulhall and Paschal McEvoy, Community Planning Consultant Sean Crowley, chairman of the SCDA Donal O’Shea, David Kinsella and Niall Creery.

When planning permission went in for Lagan Construction to build the proposed development last June there were no objections or submissions, only two observations. One from a local businessman and one by SCDA.

“It appears that it slipped under the radar a bit,” said Mr Kinsella.

But residents countered this opinion.

One said: “Nothing slipped under the radar. It’s not the people of Stradbally’s fault. The developer needs to have due diligence.

“This was done on purpose. The planners should be held accountable. It’s the ordinary Joe soap who’s being blamed here.”

While another resident, Sean Coffey said: “It really sounds like Laois County Council planners didn’t take due diligence. You made a really big boo-boo here.”

Mr Kinsella replied stating: “It seems like people were caught by surprise. It passed through unawares to some.” Mr Kinsella agreed that the plans laid with the planners and not the residents.

Cllr Tom Mulhall is of the opinion that something can be done.

He said: “Okay the horse has bolted, but we can get it back in the shed.

“There are a lot of good things happening in Stradbally. A lot of progress. But sometimes when you have progress there are issues.”

A number of ideas were suggested to help ease traffic flow – including knocking down the walls at the entrance of Church Avenue.

As the walls on either side of the entrance belong to the Church of Ireland and the Sacred Heart Church, they are marked as heritage walls and cannot be knocked down the meeting heard.

Concerned resident Gerry Kelly interjected: “Those walls are heritage walls – they can’t be interfered with. Our heritage is being destroyed.

“Those walls look like nothing to a developer but I grew up on them, walked on them. They shouldn’t be destroyed just for developers.”

Another proposed solution was to move the entrance onto the Athy road – the R428.

“The Athy road is a far better road for it,” said Mr Coffey. “During a risk assessment – which they have to do – when they look out there [at Church Avenue] and at the Athy road and see a big road and a narrow road.

“It’s already overburdened on the road here,” he added.

Cllr Mulhall also supported the suggestion to move the site entrance to the Athy road, as did Graiguecullen/Portarlington local election candidate Eoin Barry.

However the case was made that proposing to build the entrance on the Athy road instead would just be moving the increased traffic to Athy road residents without their consultation.

“Athy road residents could come back and say, ‘Why are you moving the problem onto us?’ We need to be careful here,” said Cllr Paschal McEvoy.

Community Planning Consultant Sean Crowley echoed the sentiments of not, ‘just shifting the problem’ to the Athy road without their consultation.

Eventually the decision was made for members of the top table to arrange a meeting with the Kylebeg Residents Association and then to take their proposals to Langan Construction to see if an agreement can be reached.