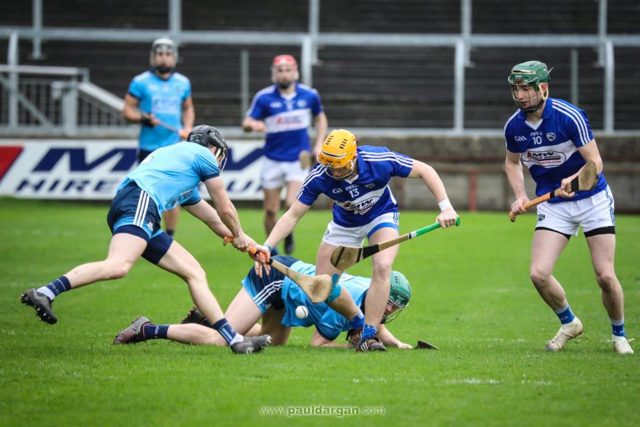 After a superb display on this dreary day, Laois had their hopes of a second league win taken away in the dying minutes of this game.

However Offaly beating Carlow 4-8 to 1-10 guaranteed a spot in the quarter-finals for Laois, as the head into the last eight against All-Ireland champions Limerick with their spot in fourth place.

It was a heartbreaking end to a game in where dominated for so much of. Laois’s physicality was at its peak today, particularly as the full-back line cleared their lines a number of times.

In saying that, first half was frustrating at times, as Laois cooled off on the scoring front.

Joe ‘Tricky’ Phelan saved Laois’s bacon by overturning a number of balls on the full-back line.

Three near goal chances within the first 35 minutes had the Laois fans with their hearts in the mouths as a number of balls dropped in on the full-forward line before being cleared.

Laois took the lead after a scrappy start, as Sean Downey pointed from 55 yards out to put Eddie Brennan’s men on the board

Good play from the Laois half-forward line set up Aaron Dunphy for a second score, but a sloppy pass fell to John Hetherton who hit back for Dublin, making it 0-2 to 0-1 after four minutes.

Danny Sutcliffe and a Sean Moran free drew the sides level but a superb point from Willie Dunphy put Laois back in front.

Following this, corner back Joe Phelan worked the ball up to Mark Kavanagh who pointed to become Laois’s fifth scorer of the game.

Three frees off the stick of David Treacy cut this lead back to one as Laois went in to the changing rooms leading by one point – 0-7 to 0-6.

Dublin substitute Oisin O’Rorke drew the sides level after less than a minute from the restart while Shane Barrett struck them ahead for the first time in the game in the 36th minute.

Great work and a lot of physicality from captain Paddy Purcell saw him point his first of the game to bring the sides level once more.

Cha Dwyer followed this up with a stellar point of his own from the left-wing.

After a number of questionable calls, a close range free was afforded to Mark Kavanagh, which he converted with ease.

Cian Boland closed Dublin’s deficit back to one while O’Rorke brought the sides to 10 points a piece.

Kavanagh’s fourth point from another free brought Laois one point ahead after 48 minutes but disaster struck as Cha Dwyer received a second yellow and Laois went down to 14 with 13 minutes to go.

Dublin’s sweeper cleared two balls before Danny Sutcliffe pushed Dublin one ahead while a Riain McBride free increased this lead to two.

A heartbreaking end – but still the quarter-finals to look forward to for this side.