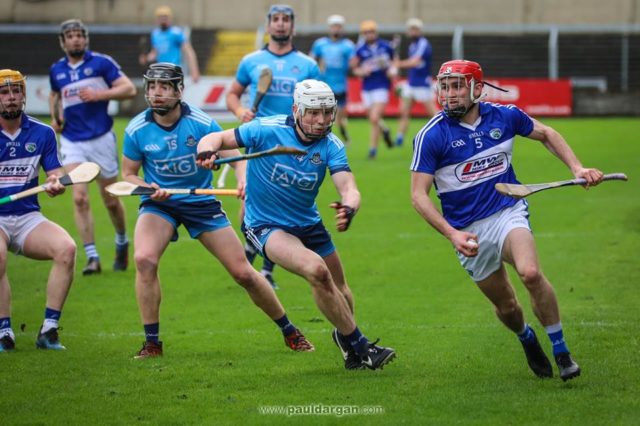 This weekend marks the final group stage of the Allianz Division 1B.

Laois senior hurlers take on Dublin in Parnell Park, where they hope to stay out of the bottom two and launch themselves into the division 1 quarter-finals.

Laois are travelling to Parnell Park for this game on Sunday, March 3 at 2pm.

During last weekend’s clash with Carlow, the Laois hurlers were hit with three critical injuries in the second half.

Centre-forward Eanna Lyons is now out with an AC joint injury for six weeks after receiving a heavy hit on his shoulder in the Carlow clash.

Meanwhile midfielder John Lennon is not named on the starting 15 for the first time in the league, after a collision in the Carlow game saw him go off injuried in the second half.

Jack Kelly was also substituted with a dead leg, and will not be playing a return to wing-back this week.

However there is an air of good news as Lee Cleere is back from his two match suspension for the game and will be a very useful addition to the back-line.

Last weekend also saw the return of Cha Dwyer to the field, and for Dublin’s game he joins up with Sean Downey for an all-Ballinakill midfield.

What have Dublin been like in the last couple of seasons?

Dublin’s recent run of form has been well documented as of late. Last weekend they managed to hold off a powerful Waterford side to a two point win to blow the league wide open.

Aside from their most impressive win yet, they have won three of their previous four matches in division 1B, only losing out to table leaders Galway.

The Dubs seem rejuvenated under new manager Mattie Kenny. The Galway native takes over from Pat Gilroy, who made tangible progress during his one year in charge.

Their most recent meeting was in the Walsh Cup in January. In this, Laois lost by two points to Mattie Kenny’s men on a scoreline of 1-18 to 1-16.

Laois got off to a bad start and were 1-3 to 0-1 down after just five minutes, but Laois settled well after that slow start to eventually cut the deficit to two.

Last year’s meeting with the Dubs in division 1B left Laois facing a relegation playoff with Antrim – which they won to stay in the second tier.

In the days before the Joe McDonagh Cup, Laois and Dublin went head to head in an All-Ireland Qualifer in 2017, where Dublin cruised to 16-point win. Laois’ last SHC victory over Dublin came in the summer of 2005.

The referee for this game is Liam Gordon from Galway.

What other Division 1B games are on this weekend?

All final group games of division 1B are taking place on Sunday, March 3 at 2pm and there are plenty of crunch ties to keep interest up until the very last minute of play.

While Laois take on the Sky Blues in Parnell Park, Galway and third place Waterford are competing for the number one spot on the table.

A key game for Laois eyes will be Carlow versus Offaly in Netwatch Cullen Park at 2pm.

Carlow are on two points – following draws with Laois and Galway – but can go through if they beat Offaly and Laois lose to Dublin.

Offaly, with no wins to date, cannot avoid the playoff or go to the quarter-finals – but a win for them over Carlow would send Laois through.

If Laois finish in fourth position in Division 1B, they will play the top side in Division 1A in the quarter-final.