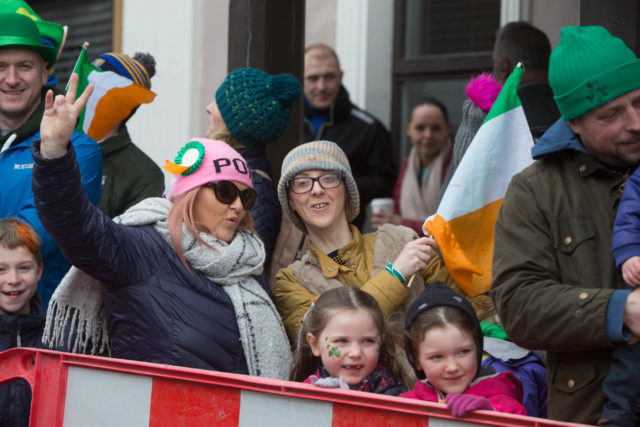 It’s less than a week away and the countdown is well and truly on for what promises to be one of the best ever St Patrick festivities in the county town.

The St Patrick’s Festival progamme will run over two days in Portlaoise with children at the heart of the family-friendly programme on the Saturday and Sunday of this bank holiday weekend.

The events commence on Saturday afternoon, March 16 with a Family Day right in the centre of town, on Main St.

The entertainment, attractions and market stalls offering hot and cold food is especially organised so as not to impede or disrupt traffic flow.

Activities and music will take place mid-Main Street from the Courthouse down to Ryan’s Corner, from 3 to 7pm. Among those on the bill are James O’ Connor, the JJ’s and Jecca the Clown.

On Sunday, St Patrick’s Day the Main Street will be cordoned off and there will be road closures and diversions to facilitate the Portlaoise parade. These will come in to effect and the barriers put in place from 7am on the 17th.

This year’s parade will celebrate and showcase all that is good about living in Portlaoise and the Grand Marshal will be the Dunamaise Arts Centre, fittingly so as the Dunamaise celebrates its 20th anniversary and is the bug of much of the local arts, cultural and entertainment scene.

Playing a leading role once more will be the man himself, ‘St Patrick’, aka Martin Maher and what a wonderful job he does every year heading up the Portlaoise parade, along with the celebrated Portlaoise Accordion Band.

Another novel feature this year is that there will be snakes of all things in this year’s parade. Don’t worry they will be in the careful hands and under the supervision of the team from Pet Party.

The parade will start at 12.30pm, commencing from the assembly point at Laois County Hall, heading down James Fintan Lalor Avenue and back up along Main Street, where it will pass the review platform in the Market Square.

Once the community parade concludes it will be promptly followed by an afternoon and evening of music, entertainment and family fun all along Main Street from 2pm.

The organisers are anticipating the highest number ever of floats and participants in this year’s parade and they have been busily co-ordinating with the Council departments, the local retailers, Gardai and Fire Service to ensure everything runs smoothly and safely right throughout the weekend, and especially on the big day.

Of course the St Patrick’s Festivities in Portlaoise would not be complete without the Road Races which are sponsored by Kia and precede the parade at 11am.

This event caters for all ages and aptitudes, from young children, couch to 5km participants as well as the more serious athletes who come from across the country to compete in the event organised in conjunction with Portlaoise Athletic Club.

Registration for the road races is at the Midlands Park Hotel or online in advance on the Pop Up Races website: www.popupraces.ie

The Portlaoise Parade organisers also note that if you wish to take part in the parade, it’s still not too late as they are still taking entries.

The message from the Parade Committee Chairperson Monica Delaney is simple: “For us the parade and the St Patrick’s Day festival is all about the children and it’s all family-friendly. So we are encouraging everyone to come out, take part and enjoy the parade and the entertainment over the weekend.”